Obama's actual Rose Garden remarks regarding the epic failure of the rollout of his signature health care legislation yesterday proves once again that the reality of rhetoric that effervescents out of this community organizer's piehole is at least as strange as any fiction I can imagine.

Once again, Obama is in full campaign mode, seemingly forgetting he's president and this mess is HIS creation.
“There's no sugarcoating it: The website has been too slow; people have been getting stuck during the application process and I think it's fair to say that nobody's more frustrated by that than I am... there's no excuse for the problems. And these problems are getting fixed.”

Any time obama speaks before his state-controlled press, they appear to actually eat his superfluousness like a line of zombies eating live rats through the chain-linked fencing. (I often think of progressives when watching AMC's Walking Dead). Heck, even one of his human props on stage behind him dropped like she took a crossbow bolt to the inner-cerebellum from Daryl. 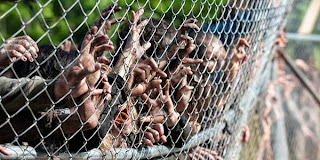 Obama then presented an alternative to the Walkers unable to breach the barbed wire barrier that is HealthCare.gov.  Just use your Obamaphone and dial his call center (think animated severed heads in a fish tank on the other end of the line):
"you can get your questions answered by real people 24 hours a day in 150 different languages."

What he didn't say was that the severed heads would be speaking those 150 different languages simultaneously, and would be in your heads long after the call disconnected.

Here is the actual script used at the Obamacare 1-800 hotline...


“Thanks for your interest in the health insurance marketplace. We are having a lot of visitors trying to use our website right now. This is causing some glitches for some people trying to create an account or log in. Keep trying and thanks for your patience. You might have better success during off-peak hours like later at night or early in the morning. We’ll continue working to improve the site so you can get covered.”

In his defense, with job creation and devastating unemployment numbers under this administration, "off-peak hours" are not as well defined as they used to be.

One good thing that came from Obama's Rose Garden word fertilizing. It gave me this great idea for a musical.

The Muse Sick Man - synopsis (so far)
The plot concerns con man Hussein Hill, who poses as a band community organizer and leader and sells band instruments and uniforms to the naive Iowa townsfolk, promising to train the members of the new band. But Hussein is no musician and plans to skip town without giving any music lessons. 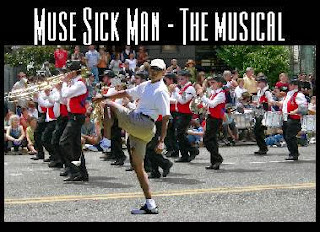 Oh, we got glitches
Right here in Washington City
With a capital 'G' and that rhymes with 'B' and that
stands for...

Well, that's all I have so far.

I was sharing this idea with an ex-buddy of mine. I say "ex" because he accused me of stealing my original idea from some old musical called Music Man. Not even close! After reading the wiki, I learned that Harold shoots pool while Hussein plays golf!

Read what the critics are saying about the Chattering Teeth blog!

"I wrote that dude a letter once." - Steve Martin
Posted by DaBlade at 7:57 AM