Finally! the homeless get an uprade in transportation and accomodations

At first blush, this contraption may appear to belong to an ice cream or hotdog vendor. 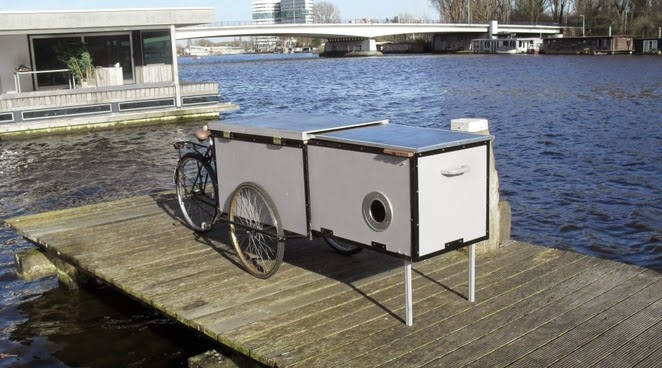 Sure, the dude pedaling it would likely be dressed in rags and have wild, bloodshot eyes barely discernible through the scraggle of birds-nest-like hair and debris-filled beard, but nothing gets me hungrier than the aroma of steaming franks and mustard wafting thru the air (with a hint of urine and vomit in the background, JUST LIKE THE OL' BALLPARK when you were a kid!)

Meet The Housetrike: "The tiniest of tiny houses is built on a tricycle"


C'mon now, what mentally ill and/or alcoholic touring cyclist wouldn't be proud to enter this bad boy in the next Tour De France? The Alps might get cold at night, but with the handy pullout "expando" feature, PRESTO! A dining room with built-in porthole/bathroom. This rider has all the creature comforts of back "home"( under the viaduct).

This Dutch inventor guy has things all figured out, because the most "pressing problems for people living on the streets" has to be the lack of security and safe storage for their nearly empty bottle of Ripple and old mayo jar of saved belly lint. And trust me, you don't need the "stigma" associated with displaying your can deposits in an open shopping cart with one bad wheel.


Only $1500? Well hells bells,  Too rich for my blood.  In obama's America, you have to be as rich as a Chinese farmer to be able to afford one of these bad boys.