Snakes on a Blog

If you're like me, you try for a little escapism from the madness of the day by channel surfing, only to stop and watch whatever is on NatGeo Wild or Animal Planet.

And, if you are even more like me, then you also suffer from a posterior "left cheek, right cheek" Donny & Marie tattoo regret. I guess some ideas just sound better when one is in their mid-40s, but that is for another blog. It never occurred to me at the time, but every morning's porcelain appearance of the tanned and tapered hidden imam only serves to remind me of my hurt at their career split. Just take solace in the knowledge that you are not alone. And go easy on the hot sauce with those bean burritos.

Where was I? Oh yah, escapism. Most times these attempts fail due to my overly fertile and brilliant brain thingy making metaphornalogies from seemingly innocuous shows. For example, the other day I was watching an episode of Survivorman where Les was squatting under a makeshift lean-to of leafy foliage in some remote rainforest, cold and wet and subsisting on roasted dung beetle, while staving off attacks by fire ants and sparrow-sized mosquitoes.

I thought to myself, "Well, this would still be preferable to spending another 2 years under the obama administration." And who knows? After another two years of this clown, these survival skills may just come in handy.

The internet is no better. Take, for example, this National Geographic article from the other day regarding Vietnamese fisherman who simultaneously harvest squid and venomous sea snakes. 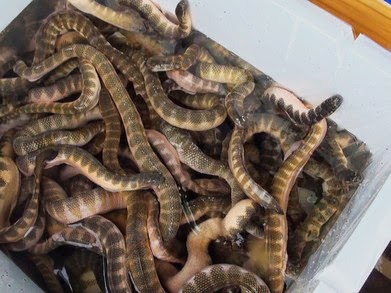 From "squid" to "sea snakes", and I immediately think from "squish" to "spineless", which naturally leads me to think of House Speaker John Boehner, who happens to be one of the people I am trying to temporarily forget while reading National Geographic.


I decide to trod on and continue to read the article in hopes that this was just a temporary deviation of my escapism efforts.

OK, there I go again, but I defy anyone to read about "a writhing ball of venomous serpents" and NOT think of Congress. It occurs to me that my efforts may be harder than I originally thought. I read on...


AH HAH! There it is! While I am all for grinding up RINOs and consider it good medicine, I am against the archaic practice of the poaching and slaughter of the African rhinos for false medicine. One is on the verge of extinction, while the others are so numerous as to be considered an infestation of what was once a Grand Ol' Party. 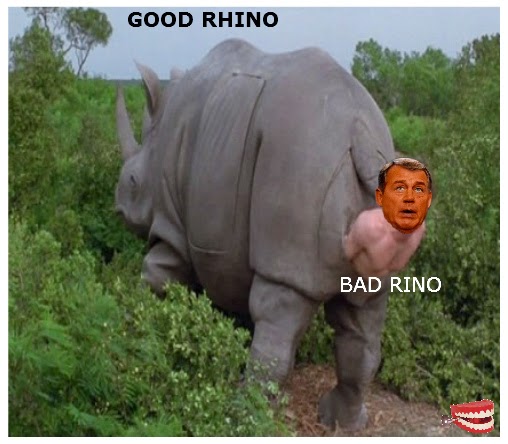