Welcome to The Flatulating Moose

Seriously!? What's an environmental PETA whacko to think? On one hand, a poor, innocent creature of the Erf has been saved. On the other hand, moose flatulence has been artificially perpetuated by meddling humanity. I mean, everyone knows that the Erf's temperature has remained a perfect constant for thousands of years, and only began to warm when the humans arrived with their hockey sticks (or something).

Here's what we know:
FACT: This avalanche was the result of Alaska's unseasonably warm weather and unstable snow pack.
FACT: Researchers in Norway claim an adult flatulating moose can produce 2,100 kilos of methane a year, equivalent to the amount of CO2 caused by an 8,077-mile car trip.
FACT: If I were starting this blog today, it would be called "theflatulatingmoose.blogspot.com"

We know that forest fires have become increasingly more severe due to human interference and insistence on putting out these fires as quickly as possible in order to save as many mountain mansions of rich venture capitalists as possible, thereby leaving additional dead fall fuel for the next one. 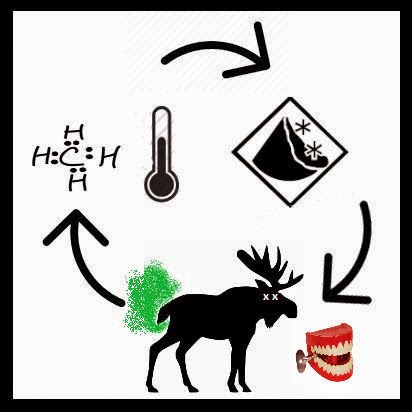 I just hope there is still some snow in Alaska come my planned cruise later this year, or I swear I will hang my tail over the rail and give this moose a dose of his own medicine.
Posted by DaBlade at 10:32 AM