First, CNN had promised not to pit Democrats against each other in the debate. Then we learn that CNN had a brand new shiny Podium  delivered back stage (still in its bubble wrap) to the Democratic Debate just in case Biden wanders by. 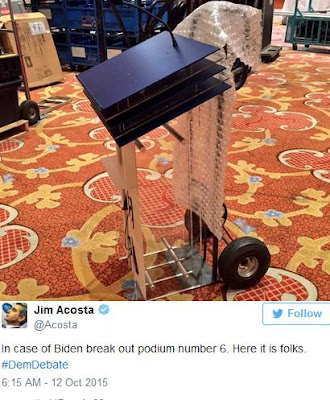 Which is it, CNN?!? if you're not planning on pitting the candidates against each other, then why would you add Biden's Empty Podium to the mix in order to intimidate the others?

This is obviously an aggressive move by CNN in hopes that Biden's Empty Podium can somehow add some energy to the stage and boost the ratings of this otherwise ratings yawner.

The move could backfire on CNN, resulting in the eventual election of Biden's Empty Podium. Why not? Clearly, this podium has more personality than the other candidates combined. And the American people DID elect an empty Teleprompter the last 2 times.

At one point, Bernie Sanders may have had a mental breakdown, but really - how could you tell? It was during a sequence where Sanders gave his millennial-pandering "free college" promise. All the other candidates (as well as Anderson Cooper and the other debate moderators) shook their collective head's in animated agreement with Bernie when anyone promised FREE STUFF!!

When Sanders noticed BIDEN'S EMPTY PODIUM standing stone cold silent, he may have lost it (but really - how could you tell?)

SANDERS: Your silence mocks me, sir! Why must you stare me down? Girls would do that to me while I was in college... laugh at me staring at me.. its unsettling.. its disturbing... *whimper* (Bernie begins to pull out white tufts of his own hair)... OH THE HUMANITY!!!

As the lights were turned off long after the crowd had left, Bernie Sanders sat on the darkened stage all by himself. Tufts of his hair were strewn about, as he methodically continued popping the bubble wrap that had once protected BIDEN'S EMPTY PODIUM.