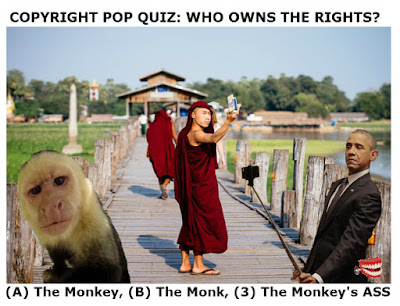 ...And should the Monk be forced to perform gay wedding for the other two?

I've said this before, and I'll say it again. With all of the challenges facing us in this country and in this world today, I think we can all agree there is no more pressing issue than whether or not the monkey who took this selfie should own the copyright. 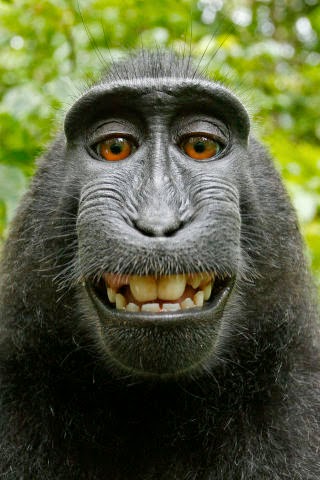 Legal and moral question of the day:

Better yet, would the monkey ponder his own admonishing output?

Neither a borrower nor a lender be;
For loan oft loses both itself and friend,
And borrowing dulls the edge of husbandry.
This above all: to thine ownself be true.

Don't worry PETA progressives, no harm came to the hypothetical monkey above in the making of today's blog. As far as I know, William Shakespear was buried with his camera phone and typewriter.

Besides, PETA will have its paws full with the lawsuit they just filed on behalf of the macaque who stole a British wildlife photographer's camera and took a series of selfies that would shame that obnoxious Olan Mills solicitor.


What kind of crazy world do we live in where this monkey would be denied his copyrights?

Clearly, the rest of the world is behind this country's progress with regards to rights. We have figured most of that stuff out already.

For example, we know a baby doesn't have any right to live (or to keep possession of it's internal organs), until and unless he or she manages to roll of the stainless steel gurney of their birth, dodge the scalpel stabbings of a dozen evil females, escape out the Planned Parenthood doors, attain the age of 18 years, and finally to start voting Democrat. Fairly simple, really.

99% of macaques on the street would agree that Christians have no rights, whether they be florists or bakers or county clerk marriage certificate makers. However, they will show their teeth and screech a lot if you try to take back any stolen items... No, wait. That's progressives who do that.

So with the lawsuit now officially filed, we are one step closer to justice, or as the macaques like to say: NO JUSTICE, NO FECES". 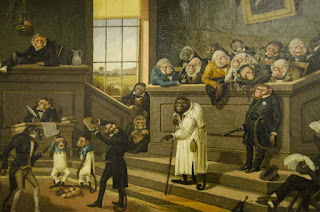 Photo by: Georgia Sparling, Henry Herman Cross's painting of monkeys as people in a courtroom drew $19,000 at the auction.
Posted by DaBlade at 7:18 AM