President Hillary's Brain in a jar

I fell asleep immediately after listening to the latest Matt Drudge interview on my iPod and dreamed of President Hillary's Brain.

I know. At this point what difference does it make? 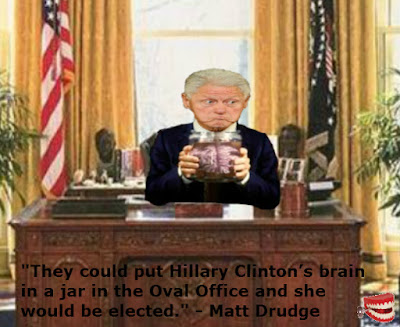 “How sick are the American people right now? I’ve been saying that they could put Hillary Clinton’s brain in a jar in the Oval Office and she would be elected. People are really sick…" - Matt Drudge

That is stating the obvious to those of us who still care. We live in a day where Oklahoma sickos removed the 'controversial' Ten Commandments monument in the dark of night while at the same time the city of Detroit raises a satanic statue. Meanwhile, the Planned Parenthood baby slaughter houses are still in business, we have allowed obama to align this country with the terrorists while turning our backs to Israel, and the targeting of Christians continues.

How could Hillary's emulsified brain in a jar do any worse?

Of course, according to this story, -
The desperate and deteriorating 67-year-old won’t make it to the White House — because she’ll be dead in six months.

Hmmm. I'm pretty sure Bernie Sanders has been dead for over a decade, and that hasn't seemed to affect his campaign.
Posted by DaBlade at 8:08 AM