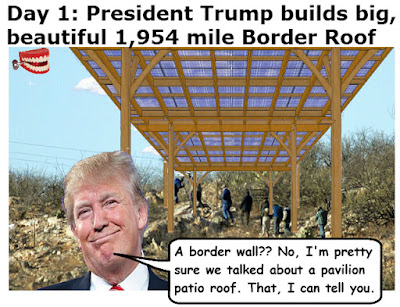 Trump has been leading in the polls for two reasons. First, he is a YUUUGE thumb in the eye of the Republican establishment who have betrayed us bitter clingers time and time again and we have had enough. Dos, he has promised to secure the border by building a big, beautiful wall.

I want a wall and I want border security. Most importantly, I want the establishment blue blood elitist Republican leadership to receive a huge black eye, ala Harry Reid's "exerciser".  However, I do not want a President Trump.
We interrupt this blog for breaking poll results!!

I threw in for Cruz when he was at like 4% nationally. I'm not taking credit for his meteoric rise since. However, it might be wise for you to force it upon me.

I find John Kasich very distracting. His constant waving of his arms and seemingly random facial tics, hand gestures and karate chops... all I could think of was David Byrne of Talking Heads fame in "Once in a Lifetime". David Byrne dancing. John Kasich debating. One is enjoyable to watch and listen to. The other, not so much. See for yourself.