11 ANGRY MEN AND A SKINNY KENYAN

Obama reports for jury duty in Chicago and is dismissed

We don't really need an explanation, now do we? Since this crime took place in Chicago, odds are that it is regarding some horrific gangland-style shooting. I'm sure that during the process of "voir dire" and the prosecution's examination of the potential jurists, he would have immediately excused Obama with his first peremptory challenge due to his history of bias against law enforcement and flaunting of the rule of law.

But what if Obama HAD been seated on this jury?... As I was reading this linked article, I was well into the second sentence dealing with the adulating'crowds trying to get a glimpse of the 44th US president' when I noticed my eyelids beginning to droop. "Have I been hit with a tranquilizer dart again?," I mused... as I started going numb. I feeel... sooo... sleeeepy... Zzzzz.

WE INTERRUPT THIS NONSENSICAL BLOG POST TO BRING YOU THIS NEW MOVIE TRAILER FOR WHAT WILL BE THE BLOCK-BUSTER MOVIE EXTRAVAGANZA THIS SOLSTICE SEASON! 11 ANGRY MEN AND A SKINNY KENYAN... 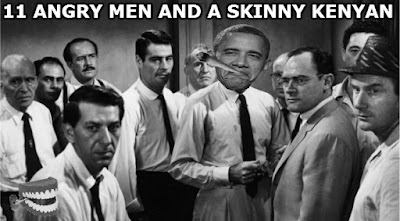 PLOT - The defense and the prosecution have rested and the jury is filing into the jury room to decide if a young black man is guilty or innocent of murdering execution style a white police officer during a Black Lives Matter riot. What begins as an open-and-shut case of murder soon becomes a racist platform for one marxist, honky cop-hating jurist.

NARRATOR - WATCH THEM. AND PRAY, FOR SOMEDAY YOU MAY BECOME ONE OF THEM. 12 MEN WITH THE SMELL OF VIOLENT DEATH IN THEIR NOSTRILS.


Juror #8: I don’t know – not having been there and not seeing all the facts – what role race played in that, but I think it’s fair to say, number one, any of us would be pretty angry; number two that he Chicago police acted stupidly in arresting somebody.
*sporadic nodding in agreement by the democrat jurorists*

Juror #4: WHAT'S THE MATTER WITH YOU GUYS? YOU'RE LETTING THIS COP-KILLER SLIP THROUGH OUR FINGERS!

Juror #3: Does anyone else smell that skunky marijuana odor? Who's been doin' weed? Somebody's been choomin'...

Juror #8: (speaking to the defendant) If you like your freedom, you can keep your freedom.

DEFENDANT: (in orange prison jumpsuit and in handcuffs and chains) ALLUHU AKBAR!

*crowd gasps in shock at realization the accused is a moozlim terrorist...

Juror #8: Unless we get on our high horse and think this is unique to some other place, remember that during the Crusades and the Inquisition, people committed terrible deeds in the name of Christ... If I had a son, he'd look like this defendant.

NARRATOR - YOU'LL LAUGH! YOU'LL CRY!! YOU'LL DEMAND A REFUND!!! 11 ANGRY MEN AND A SKINNY KENYAN. COMING SOON TO A THEATER NEAR YOU!
Posted by DaBlade at 9:28 AM