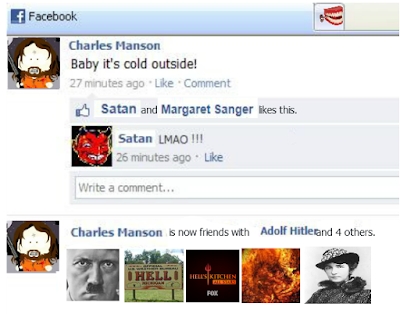 At least now we don't have to worry about Manson using his 'talents' of persuasion in getting folks to murder for him. The same could be said of Hitler and Sanger.

The murderous cult leader was caught with an LG flip phone under his mattress, and it was determined that he had made numerous calls and sent text messages to people in California, New Jersey, Florida and British Columbia.

We all have our own unique talents and natural gifts. Some folks express themselves through their art, music, words, etc. Manson's talent is an uncanny ability to persuade folks to kill for him. The story doesn't state the purpose for Charlie's calls - but if I had to guess - Charlie's got a Smart Phone and now Janie's got a gun.
Posted by DaBlade at 9:37 AM