First, let's start with boys high school lacrosse and Thursday night's matchup between Flint Powers Catholic and Detroit Catholic Central. Folks, I know this is Michigan in the springtime, but c'mon! 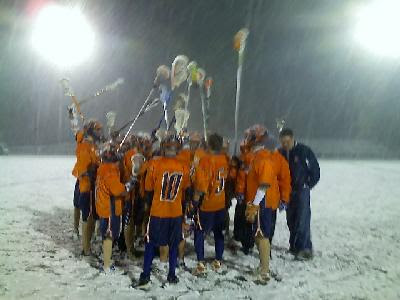 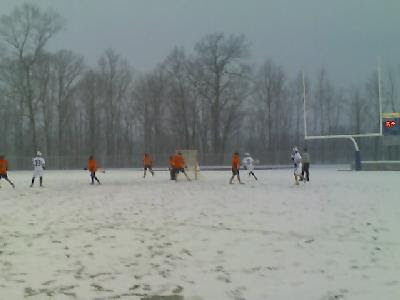 Algore was nowhere to be found in the stands on this one. The spring blizzard brought between 4-6 inches, and it all seemed to fall during the lacrosse game. It added another dimension of confusion to the game, as blowing snow and freezing temperatures limited my visibility, as well as my brain's ability to fire synapse. Final score, DCC 9, Flint 7. Not too shabby, considering that DCC scored the first 5 goals in the first quarter to take a 5-0 early lead, and DCC makes a regular appearance in the state championship game. We kicked their butt after we "warmed up" (read: froze solid and lost all feeling in extremeties). I think the boys will be very good. This was the first official game of the season, so we shall see.

On to hockey, where the Detroit Red Wings lose in overtime 5-4 to the hapless St. Louis Blues last night, spoiling Darren McCarty's return. The Wings could have wrapped up the President's Trophy with a victory over the Blues, coupled with a San Jose loss to the Ducks. Anaheim didn't cooperate either, losing 3-1 to the Sharks. This only postpones the inevitable, which will start with the President's Trophy and end with the Stanley Cup. Oh, and a plethora of individual player awards handed out to Zetterberg, Datsyuk, Lidstrom, etc. That's the plan at least.

And finally, I know it is March Madness time, but I couldn't care less about the hoops tournament, and it's not because I have fallen to the bottom of the office pool sheet... OK, maybe that does have something to do with it. But you can give me the NCAA College hockey Tournament and the Frozen Four over basketball any day. My alma mater Wolverines advanced to the second round and are heading to a showdown between the winner of the Notre Dame and Michigan State game.

Sorry Greg, I know you are probably still sore about Izzo and his Spartan B-ballers bowing out against Memphis. But if the hockey matchup becomes Notre Dame versus Michigan, you know my chant will still be... "GO IRISH!"

Hey, I figure I'm allowed to switch loyalties, what with my eldest being a domer and all.
Posted by DaBlade at 8:39 AM