High school lacrosse season has arrived and I couldn't be happier. Lacrosse season bridges the gap between the regular HS hockey season and the summer hockey season. While lacrosse does not hold the same sway over me as hockey, in some ways it's better. They both have goals on either end of the ice/field with the object of sending the game's designated projectile (puck/ball) into said net. Lacrosse is a game of skill, athleticism, and grace, interrupted by numerous violent and indescriminate assaults to opponent's upper torso using your stick. Cool! 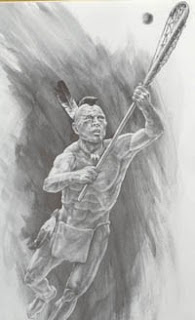 Let me tell you a little bit more about lacrosse, for I have studied it intensely for many years. The word "lacrosse" comes from the french, and literally means "the crosse", and refers to the stick weapons used by the Christians to defeat Napolean in the French Revolution.

Ok, a quick google search and 30-second visit to wikipedia suggests that the prior paragraph is not entirely true, and that lacrosse has it's origins in North America. The game was invented by the plains indians and originally called "dehuntshigwa'es", meaning "men hit a rounded object" (like Custer's head). In fact, early lacrosse balls were actually skulls of early settler's. I can not completely swear to the veracity of the last sentence, but it's probably true. Savages. 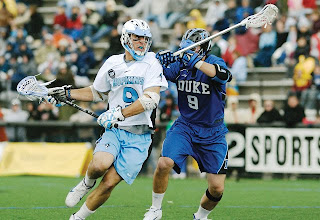 In any case, the game today is played with a very hard rubber ball that, when thrown with the crosse (stick thingy), can travel over 100 miles per hour. Did I mention that you can two-hand your opponent with your crosse? Don't worry though, the players are covered with pads that shield and armor over 3 % of their bodies. Anyway, it is an interesting game (and an interesting ride home, as I watch my son in the rearview mirror counting contussions, welts, and purple bruises scattered about his chest and arms). Why is he smiling? Honey, did he take a blow to the head?

This is the beginning of my second season as a lacrosse fan, and yet I can't tell you the function of any of the chalk lines. It's like the groundskeeper got hammered and started wheeling the chalk cart around the football field, staggering while releasing a thick line of chalk. Just look at the shapes! I see squares, rectangles, parallelograms, and, if I'm not mistaken, a rhombus or two! I'm not entirely convinced that the referees know all of the rules either, but occasionally they will call a foul, and the offending player will have to kneel down for a minute or two on the sidelines. What? No humiliating penalty box? They could make the player sit in the porta potty for the term of his penalty sentence.

My ignorance of the game does not stop me from cheering enthusiastically. Maybe that's just my teeth chattering, because it's usually 20 degrees with a biting wind in the bleachers this time of year. And the players in those shorts! Not me coach. I think I'd at least rig a battery powered cup warmer.
Posted by DaBlade at 6:51 AM