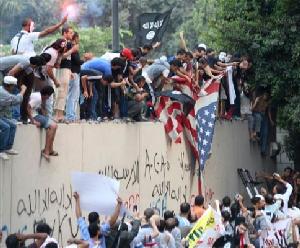 CHATTERING TEETH NEWS EXCLUSIVE: Co-ordinated al Qaeda 9/11 attacks on our embassies in Egypt and Libya have left U.S. ambassador Christopher Stevens and several other Americans dead. Now, American embassies in Algeria and Tunisia are on high alert for more attacks.

The Obama administration has acted boldy and quickly by immediately sending an apology to these young demonstrators. President Obama has since ordered a pamphlet drop on the affected embassies, re-stating the apology and promising immediate incarceration and prosecution of the Californian filmmaker who produced a film that ridiculed Islam's Prophet Muhammad.


"...There is no doubt thaaaat... this filmmaker acted stupidly," Obama stated.

Obama has made yet another gutsy call in bypassing Congress and issuing an emergency executive order that offers these "undocumented embassy immigrants" who have crossed the border into sovereign United States territory, work permits and deportation deferrals.

OBAMA: They can stay. After all, they climbed these embassy walls in hopes of improving their lives. What I reject is when some folks sit on the sidelines and root for failure. "You're not mopping fast enough." "That's an Islamic mop." Hey Mitt, why don't you grab a mop, instead of talking smack.
Posted by DaBlade at 7:35 AM