Maybe you saw the video. A soccer match between an Iranian team and the visiting Saudi Arabian team.

During a stoppage of play, a group of players are visible arguing with the referees. It's not clear what the dispute was about. I'm guessing it was either about a perceived blown call on the field of play, or just to complain about that anti-Islam video.

Meanwhile, a nearby player picks up a round object and casually walks it over to the sideline where he gives it a little toss off the field of battle. It hits the ground and immediately explodes. 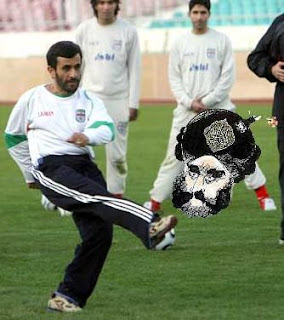 A GRENADE EXPLODES IN IRAN!! This is... news? Folks, the blame for this clearly lies with the player for not identifying exactly what the object was before picking it up. In Iran, if you blindly pick up an unidentified round object, don't be shocked if it's a grenade. Or some other explosive device. Or a severed infidel head for that matter. It's just a culture thing.

Would it be news if a YouTube video came out showing an American blindly picking up an object before identifying it, say - on the streets of New York City - only to discover they were holding a used condom? An old and rusty heroin needle? An aborted fetus?

We love our sports over here too. For me, I love going to Comerica Park to watch my Detroit Tigers play. There has been a time or three when the umps blow a call that goes against the home team. I've never witnessed a tossed grenade in response. Maybe a few "F-Bombs", but everyone still has their fingers when play resumes. Of course, we have real sports over here. If I were subjected to a soccer game, I have no idea what kind of inhumanity to man to which I'd be capable.

So in conclusion, the soccer match was called due to showers (of shrapnel), and the Tigers lost 12 - 4 to the As. Them no good flin flarn fritter fratter f&$#s!!!