OK, not really. Jimmy has been missing for 37 years while by most accounts Miss Fluke's crawlspace is in the lower 30s. 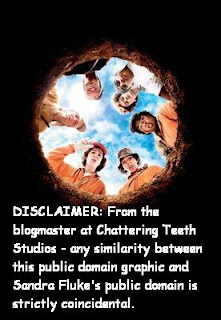 But in the spirit of this year's political Democrat tagline: "Let no Hole go to waste"

The latest in the search for Jimmy Hoffa...

On July 30, 1975, Teamsters mobster Jimmy Hoffa visited a suburban Detroit restaurant for a planned meeting with a wiseguy from 'Jersey and another nose-bender from Detroit. He hasn't been heard from since.

Foul play has long been assumed, but I wonder if he just got a bad coney island hotdog from the drivethrough while he waited for his buddies. After all, what kind of friend would let you suffer from a tummy ache without giving you a merciful triple tap center mass, roll up in large rug and off the Ambassador bridge?

The point is, there has been a 37 year long macabre game of "Where's Waldo's Stinking and Decomposing Corpse?" ever since. Rumors persist that his body is encased in concrete at Giants Stadium, another that his bones are entombed at a nearby horse farm, and still another has him swimming with the 'gators in a Florida Swamp.

The latest tip from a dying man (usually a reliable source in Hitchcock films) has led investigators to search under a Detroit suburban driveway. Apparently, ground penetrating radar has proven beyond a shadow of a doubt "that the earth had been disturbed at some point in time" there.

In other words, we can safely rule out the possibility that the 12-foot-by-12-foot concrete patch was naturally occurring. After intense and expensive "Environmental" testing, investigators are pretty sure the concrete was poured purposefully in this location (probably between 2X4 wood forms!) many years ago - thereby "disturbing the earth".

In an ongoing expenditure of taxpayer dollars, soil samples taken by the Michigan Department of Environmental Quality at the site will be examined by a Michigan State University forensic anthropologist for signs of human decomposition. This MSU scientist has experience in this field as he has recently been studying this year's version of the Spartan football team for evidence of same.

What a bunch of democrat bureaucratic jackasses! Just dig a hole already! Seriously, gimmee a sledge, a case of LaBatts and an afternoon and I could have this done for them.

By the way, if "Five-O" comes sniffin' around to ask me where I was and what I was up to on July 30, 1975, I gots me a pretty tight alibi.  This was a month before my 14th birthday, and while it would have been logistically possible for me to make this 60 mile trip on my mountain bicycle with the banana seat and tall flag off the back, there is no way that dude's rigor mortis frame would have fit between my handlebars.
Posted by DaBlade at 8:00 AM