Day One of the Democrat National Convention and I can't find my remote!

Why did Elvis shoot his tv?

Picture the scene. It's 1970-something. You're in a Las Vegas hotel room with the blinds closed.  You've got a full 'fridge of snacks, half a pack of cigarettes, it's dark, and you're wearing sunglasses. Oh, and you also have a loaded 38 revolver tucked neatly under your cape, a mean assed temper and you're Elvis Presley.

The question isn't "why did Elvis shoot his TV?", but rather "did the TV really ever have a chance?" 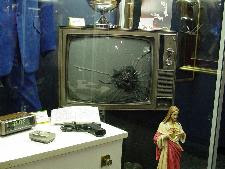 Still, folks want to know what "triggered" Elvis into blasting his TV screen. Was he watching news coverage of the Beatles and was jealous? Was it Richard Nixon coverage?... or maybe the Democrat National Convention was on TV that fateful night?

I don't think it was any of those popular picks, for that would be conduct unbecoming a badge carrying deputy for the Bureau of Narcotics and Dangerous Drugs. I choose to believe that this was simply Elvis' way of calmly turning off the television when he was through watching it. The "Elvis remote", if you will.

Why did Elvis shoot his TV? You might as well ask why rain is wet? Why do birds sing?... Why ain't no river wide enough, ain't no valley low enough? Why did Fonzi waterski jump over a pen of hungry sharks? Or lastly, Why would a seemingly rational, semi-lucid individual not suffering from brain damage even consider voting for Obama?

I think you'd agree, these are all excellent questions without easy answers. 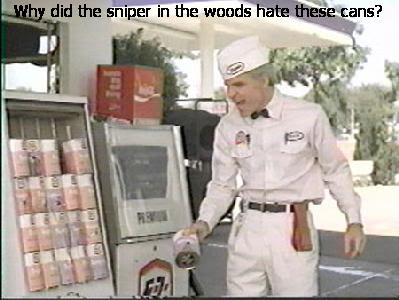 Speaking of Obama, peace be unto him, did you catch his recap of the Republican Convention?
"It was a rerun. We’d seen it before. You might as well have watched it on a black-and-white TV. If you didn’t DVR it, let me recap it for you. Everything is bad, it’s Obama’s fault, and Gov. Romney is the only one who knows the secret to creating jobs and growing the economy."


That actually is not a bad synopsis. I have to give the president his due. I am quick to criticize him when he is wrong (read: every utterance emanating from his lying piehole), so I should tip my felt and feathered fedora when he stumbles into truth, even when he is being sarcastic.  In fact, I highly recommend everyone grab an ink pen and scrawl "Everything is bad, it’s Obama’s fault" on your arm. Better yet, get the tattoo.

The other thing worth mentioning in Obama's snarky recap is the swipe about the "black-and-white TV" era. Make no mistake, Obama was assaulting traditional family values here. You've heard liberals say this same thing a hundred different ways, "This isn't 'Ozzie and Harriet' or 'Father Knows Best'" - impugning and degrading television sitcoms from the 50s and 60s era that had the outdated and old fashioned "family values" theme. How "UN PROGRESSIVE!" The dads went to work and the moms stayed at home to take care of the kids. They ate family meals, the kids did their homework, and they all went to church on Sundays.

Or think "Happy Days", a show from the 70s about life in the 50s. I loved that show and I will not sit idly by as the president insults Mr. and Mrs C!

Were things perfect? Was there racism for example? Of course there was! This is the era when democrats fought the Republicans on civil rights while future democrat senator Robert Byrd ran through forests in a white sheet and pointy pillow case cap lighting crosses on fire. But one of the things that separates us conservatives from those other guys is this: We do not define (fill in the blank) with the lowest common denominator.

of course, it's no longer "progressive" for the mom to stay at home while dads go to work. In fact, Obama is doing everything in his power to make sure they BOTH have nowhere to go.

Which brings us to tonight, when I'll be snuggled up on the couch in front of my 9-inch black-and-white T.V. screen to watch the Democrat National Convention. Stocked 'fridge? Check. Sunglasses? Check. Half a pack of Grenadiers? Check.

"Hey honey! Be a darlin' and grab me my Elvis remote."

No actual TVs were harmed in the blogging of this ramble.
Posted by DaBlade at 7:50 AM