Who's ready for President Obama for life? 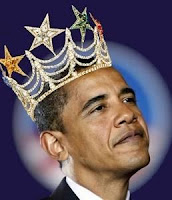 H.J.Res. 15: Proposing an amendment to the Constitution of the United States to repeal the twenty-second article of amendment, thereby removing the limitation on the number of terms an individual may serve as President.

This is awesome news America, President Obama for life! In fact, let's just get rid of these irritating "terms" and put an end to these contrived voting fiascoes every four years.

We can adopt an Obamonarchy and his successor will come directly from his bloodline. His two girls are next in line and should immediately be addressed as Princess Somalia and Princess Mo'keesha (or whatever the hell their names are). The half brother living in the ramshackle shack in that Nairobi slum would be in line after the girls. details schmeetails! we can work succession out later, now it's time to party!

Remember how Obama hinted during the fiscal cliff negotiations that he would be demanding new stimulus spending and authority to unilaterally raise the U.S. borrowing ceiling? This caused Mitch McConnell, the Senate Republican leader, and other republicans to “burst into laughter”. Well who's laughing now? You better hope King O decides to keep you clowns around at all. Every Court needs their Jesters, right?

When President Obama was asked about H.J.Res. 15, he stated very emphatically (between slurps on his Hawaiian sno cone) that it's passing was not up for negotiation and that the consequences for the entire global economy would be catastrophic if he were forced to leave office by a Tea Party led election in four years!

Dream on Republicans! No pesky Constitutional Amendments have stopped him yet!