Did you know the Qatar Masters will be held later this month, from January 23-26, and one of the world's greatest Qatar players will not even be there?

Tiger Woods may guarantee packed galleries but even the oil-rich Qataris cannot afford the former world number one's appearance fee for the only European Tour event in the Gulf state.

..."Tiger Woods demands $3 million just for an appearance, if he were to compete - which is not worth paying for a tournament of $2.5 million prize money," (Qatar Golf Association president Hassan al Nuaimi) told the Doha News.

PICTURED: This is not president Hassan al Nuaimi surrounded by fellow "Qataris", but Star Trek hippies rocking out. 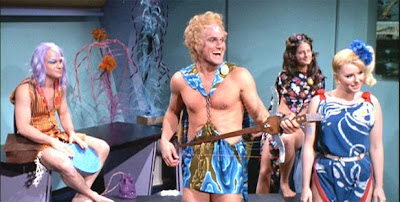 OK, I'm having a hard time believing a few things in this article. First, I don't think a small oil country in the middle east really hosts a professional golf tournament. Who wants to watch these guys hit from one huge sand trap all day? I like a good bunker shot as much as the next guy, but I'd like to see at least a couple drives and fairway shots. Putting on the beach is no fun either. So that's first.

Further stretching credibility is that we are supposed to believe Tiger's $3 million appearance fee is too steep for the Qataris. Puhleeze! Your country is floating over a vast oil reservoir. Golf sheik Al Nuaimi could scrape together $3 million faster than he could a scoop of camel poo.

Knowing what we do now about Tiger and his special needs, I'm sure his "appearance fee" includes more than a few spare million. Think about it folks, what is it that Tiger craves and the arabs are woefully short in? (HINT: Not oil, $ or camel poo).

Even if Tiger waived his usual demands for a different babe every day of the tournament and would settle for just one fairly attractive female for the weekend, how could Qatar possibly find one?

So in conclusion, the Qatar Masters is coming up. Qatar is not a planet in the Epsilon Four star system (nor an electronic musical instrument perfected by big-haired male earthlings), but a country in the Gulf region of the Middle East. The Qatar Masters is a golf tournament, and Tiger Woods will not be there.

You'll have to tune in to see if Eddie Van Halen makes the cut this year. 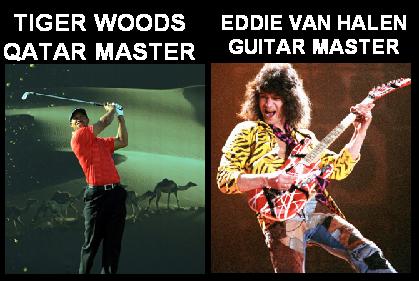