I wish they all could be California Chrome!

I love this horse and can't wait for the movie!
“It’s like a storybook kind of thing...” 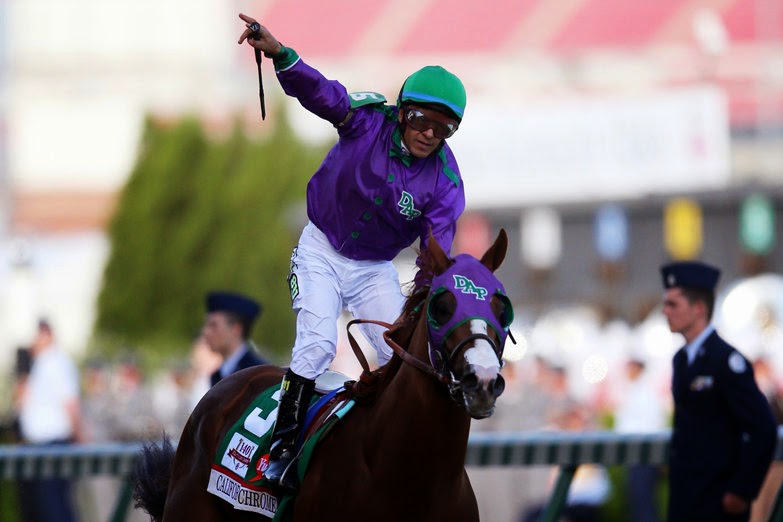 The logo "DAP" sported on the silks of California Chrome and jockey Victor Espinoza stands for Dumb-Ass Partners, a dubious title bestowed on the owners for purchasing a "worthless" mare Love That Chase at an auction for $8,000. California Chrome was foaled on Feb. 18, 2011 and was the "Love child" of Love That Chase and Lucky Pulpit, a winner of three races from 22 starts who was standing for $2,500.

RANDOM THOUGHT: What would weigh more, $2,500 Dollars worth of filled Elmer's Glue bottles or a retired Lucky Pulpit at the auction block?

I have nothing against the "wealthy owners and regally bred horses" dominating this sport per se, but I find it inspiring that a one-horse stable produced the Kentucky Derby champion for a couple of working folks. California Chrome doesn't seem to realize its "Chestnut Trash". Since nobody discouraged this colt by telling him he didn't have it in him, he didn't know any better.

There might be a life lesson in there somewhere. Be encouraging to your children... and make them eat their carrots.

I'm lookin forward to the Preakness in a couple of weeks, then the Belmont shortly after. Will California Chrome win the next two (that would be a lucky 7 in-a-row) to become the first Triple Crown winner since Affirmed in 1978?

Do you care? Maybe you're like one of my FB friends who posted this yesterday:

I certainly understand that opinion as it was one I used to share. that is, until I visited Churchill Downs many years ago during a newspaper convention held in Louisville. Oh the pomp! The circumstance!

Now there is nothing I like to do more on Derby day than to light a cigar, sip a mint julip and prance around the living room in a wide brimmed hat with flowing ribbons.

The last sentence was included to see if you were still awake.I obviously am not allowed to smoke cigars in the house.

I love that these owners, after being mocked as dumbasses, had the stallions to actually have a DAP logo put on their uniforms. This is reminiscent of Babe Ruth's called shot point-and-swing home run. I do love this world series of thoroughbred racing. It's not too late to jump on California Chrome's bandwagon!

LUCKY PULPIT: "Did someone saaaaay something about a plow wagon?"
LOVE THAT CHASE: "Go baaack to sleep 'Elmer'. I'll wake you when your boy is running again."
Posted by DaBlade at 8:50 AM