The GOP presidential candidates stopped over to the Chattering Teeth Studios today to watch the obama news conference concerning the Iran nuke deal on my 21" big screen TV. 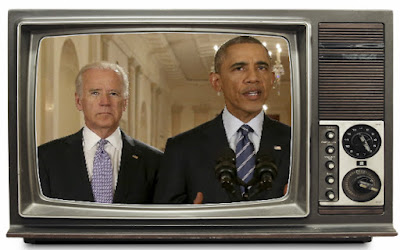 OBAMA: After two years of negotiations, I have achieved something that decades of animosity has not...

Ted Cruz: We know. Complete and utter surrender to the axis of evil.

OBAMA: ...This deal is also in line with a tradition of American leadership. It’s now more than 50 years since President Kennedy stood before the American people and said...

Rick Santorum: Is it just me, or does the Vice President look like he had a bad burrito for lunch?

Marco Rubio: Joe definitely looks like he's late for an appointment to drop the obama kids off at the pool.

John Kasich: Quiet guys! I want to hear this!

Donald Trump: Speaking of "trust, but verify"... I TRUST that was just gas. However, I really think I ought to VERIFY that El Chapo didn't just make another prison break, if you get my drift.

Chris Christie: Can we stop with the juvenile fart and poop jokes please? I'd like to hear our commander-in-chief speak! Hey Carly. Would you be a doll and get me another donut?

OBAMA: ... under this deal, Iran will also get rid of 98 percent of its stockpile of enriched uranium....

Scott Walker: Speaking of ridding the stockpile, and judging by Biden's pinched face, it looks like the missile may be peaking from the silo.

Carly Fiorina: Joe may have just found the hidden imam!

Mike Huckabee: Blow me, Jeb. We're just having a little fun here while we can. You know, before the inevitable mushroom cloud obama has just guaranteed.

Bobby Jindal: While we have all been fixated on Biden's constipated face, and rightfully so, has anyone else noticed the camera framing our big-eared president's head in front of the chandelier? It makes him look like he is wearing pearl earrings and a pearl necklace, courtesy of Iranian President Hassan Rouhani.

Lindsey Graham: Out of everyone here, I have the most forun policy expeeeeriunce.

Ben Carson: You can pucker up too, Lindsey. Nobody takes you seriously here.

OBAMA: ...And finally, I want to thank the American negotiating team. We had a team of experts working for several weeks straight on this...

Rand Paul: Wait, experts? I thought he had John Kerry on this?

Donald Trump: Seriously, why didn't the president put Biden the "underwear bomber" in the room to negotiate this deal...  Roushani would have taken one look at that face and either made a rushed deal to our benefit, or called for a UN inspection and cleanup team in hazmats to investigate.

Except for a few dissenters, it appears we are all in agreement. Obama just made us another big ol' crap sandwich. I expect Israel's "let's move" response, and I don't think it will be Michelle's program.
Posted by DaBlade at 9:57 PM