Zeke is our White Sheperd puppy. He enjoys playing fetch with his favorite orange ball, and loves to play tug-o-war with his white stuffed 'lambie' toy with the obnoxious squeakers. Here is the latest Youtube video of Zeke in action. I'm sure it will go viral.

Zeke's diet, until recently, consisted of homemade dog food prepared by Mrs. DaBlade in the crock pot or oven, whichever the latest recipe called for. Usually she would cook a dish with chicken and/or beef with various vegetables, but always with the secret super puppy ingredient. Hint: I really miss the aroma of simmering sardines wafting through the house. *sarcasm*

Apparently, Zeke gets bored when left alone for four hours and fills his time by reading. I imagine he pads over to browse the collection on the bookshelf, pulling out a single selection, curling up on his bed to read.  When finished, I imagine he carefully replaces each tome in its slot and takes another. That is, until... 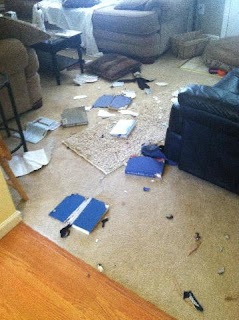 Zeke's first birthday isn't until September 5th, but already he has proven to be a discerning literary critic. This picture is Zeke's recent book reviews of Bill O'Reilly's 'Killing Jesus' and 'Killing Lincoln'. Definitely "Four Paws Down".

Many other books were within reach but no others were out of place except for these two. I have no other explanation than to believe that Zeke is not a fan of O'Reilly. I agree, Zeke. Too moderate.

Zeke loves when my middle son and wife pops in with their two dogs, Krueger and Koda. Krueger is Zeke's brother, and Koda is a 4-yr-old beautiful black and tan female Sheperd who doesn't usually care for the brother's rambunctiousness. Koda also loves to play fetch and usually wins the race to the ball, but Zeke always picks her pocket by taking it from her - no matter how many times she tries to spin away from him. 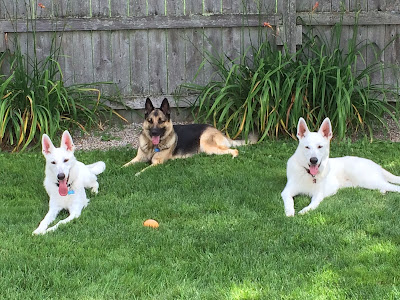 Left to right: Zeke, Koda, Krueger
Posted by DaBlade at 7:37 AM