Hillary Clinton campaign corrals media - used a rope to keep journalists away from the candidate on Saturday while she walked in this small town's July Fourth parade.

"They allowed themselves to be meekly herded – and be held back by – sneering interns carrying a rope."

PICTURED: Clinton staffer encourages journalist to step up the pace. 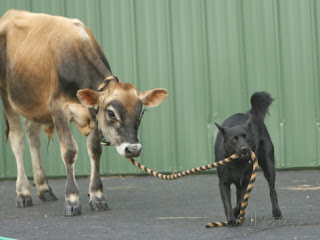 After the cankle walk parade, Hillary and her aids were brisked away in limos. The crowd slowly dispersed in order to continue their holiday celebrations elsewhere. All across the country, 4th of July celebrations were in full force. Barbeques, beaches, boats, bars and fireworks displays at dusk.

As the sun rose on July 5th, an early riser taking her dog for a walk down Main St. discovered a horrific sight. The journalists were still trapped by the Hillary parade rope line from the day before. The witness immediately called 9-1-1.

LADY: Yah, I'd like to report a corral of journalists trapped in the road by a rope line. It appears they've been there since yesterday. They look hungry and thirsty! I'm a New Hampshire Democrat. If anything happens to the press, I literally won't know what to think! Please send help! 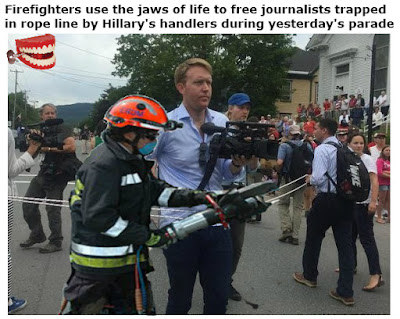 New Hampshire firefighters rushed to the scene, as their sirens filled the air. The jaws of life were used to free journalists at various stages of dehydration and hypothermia. None of the journalists would leave the area after being freed from the rope line until at last a Hillary staffer appeared on the scene and told them it was ok for them to go home.
Posted by DaBlade at 10:12 AM