General George S. Patton channels Obama for his speech to the Third Army in 1944, prior to the Allied invasion of France. 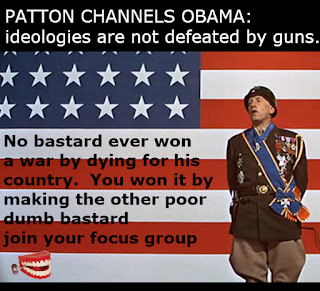 PATTON: Men, all this stuff you hear about America not wanting to fight, wanting to stay out of the war, is a lot of bullshit. But since when should our president listen to the American people?

The larger battle for hearts and minds is going to be a generational struggle. We’ll constantly reaffirm through words and deeds that we will never be at war with Germany while fighting terrorists who distort the National Socialist German Workers’ Party and whose victims are mostly Nazis.

Let me be clear, ideologies are not defeated by guns. No bastard ever won a war by dying for his country. You won it by making the other poor dumb bastard join your focus group.

All right, you sons of bitches. You know how I feel. I'll be proud to lead you wonderful guys in gay marriage anytime, anywhere. That's all.
Posted by DaBlade at 7:53 AM