BREAKING CHATTERING TEETH NEWS!
Party officials who have been pressuring Mitch McConnell to step down as Senate Majority Leader have learned that he ALREADY HAD RESIGNED back in January and was replaced by a bottle of Kentucky Bourbon! 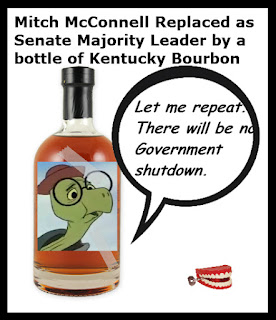 Nobody noticed this McConnell doppelganger was Senate Majority Leader because someone had pasted a picture of a cartoon turtle on the bourbon label and propped it in his chair. The bottle also had one of them electronic audio greetings card chips with a small speaker fastened with bubble gum on the back, and a motion detector (like one of them ceramic front porch frogs) that would play one of these random pre-recorded quote from Mitch McConnell whenever anybody walked by:

Let me repeat. There will be no government shutdown.

Just give us a Republican president.

We are going to crush the Tea Party everywhere.

We have passed more amendments than any before us... and I am not a tortoise.

"How in the world were we supposed to tell the difference?," stated Rand Paul. "This bottle of bourbon has offered just as much resistance to opposing Obama's destructive agenda as the real Mitch McConnell."

"While this golden amber iteration shares the faint vanilla undertones as the original and a bouquet reminiscent of our Kentucky home, it has a much better finish."

SHOCK! It was this blog BACK IN JANUARY where we accurately prognosticated that John Boehner would step down and be replaced as Speaker with an orange-dipped artificial 8' Fire Retardant Weeping Willow Tree as the new speaker of the House.

Compromise reached. Boehner out as Speaker, fake house plant in.
In what most are calling a sideways move...


While I did accurately predict that Boehner would suddenly resign, I was off on the timing by 8 months. It's true that the plastic-leafed weeping willow has not yet been sworn in as Speaker, but rest assured it is just a matter of time. The GOP establishment will likely get its way. 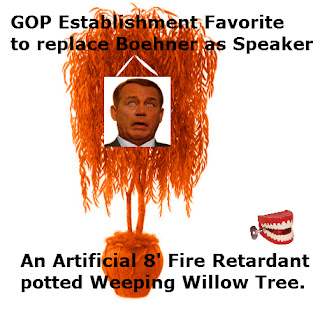 This Chattering Teeth News blog reporter had a chance to catch up with this finicky ficus while posing as a janitor by brooming a 2-foot tall pile of Boehner's cigarette butts (a whole week's worth) down the chamber hall. I found this potted plant standing in a corner all alone. I am currently engaged in writing a 3-novel series on this encounter which I expect to have complete by the winter of 2018. I am, however, able to share this teaser with you now:

ME: *whispering* Pssst... Hey plant! Me again. Remember last January when last we spoke? I stood leaning casually against the wall near your corner whispering questions and you answered me through a sort of telepathy directly to my mind so as not to alert the passers-by of our clandestine meeting?

PLANT: I remember you. You're that lederhosen-wearing reclusive conservative blogger from Chattering Teeth. How can I help you?

ME: Any word on when you will be assuming the Speakership?

PLANT: No, but it can't be much longer. I am the obvious compromise establishment replacement. I am younger than Boehner, and actually tested 10 IQ points higher. Oh, and I have deep roots in this community.  With me sworn is as the new Weeper of the House, and that bottle of Kentucky Bourbon leading the senate, there will be no stopping us getting things done for the American people.We'll promise to repeal Obamacare by pulling it up, root and branch!  Then we'll take a nap.

ME: Are you surprised the original John Boehner hung around for as long as he had?

PLANT: No, not after he discovered that bottle of bourbon had surreptitiously replaced Mitch McConnell. Boehner spent some quality time with that bourbon, and it has been rumored he replaced the original contents with his own urine.

Unfortunately, that's all the time we have for today. Just take comfort our government is in such capable hands.
Posted by DaBlade at 8:14 AM