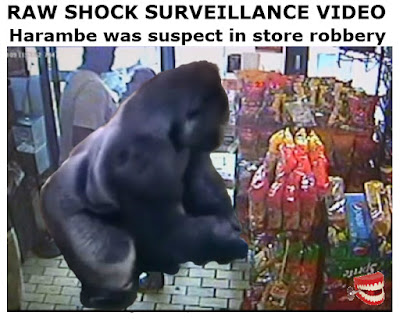 Chattering Teeth News - The Cincinnati Zoo has released surveillance video showing a "strong-arm" robbery, allegedly committed by an endangered western lowland silverback gorilla who was later shot to death by a zoo official while in his enclosure. The suspect on the video, identified by the zoo director as 17-year-old Harambe, shoplifted about $50 worth of cigars, chicklets and salty snacks from the store before making his escape.

Harambe was shot to protect a human toddler who had found his way into the gorilla enclosure. Many have wondered why the child went over the fence. Now it is believed the youngster was lured into Harambe's lair with a bag of pork rinds
Posted by DaBlade at 7:52 AM