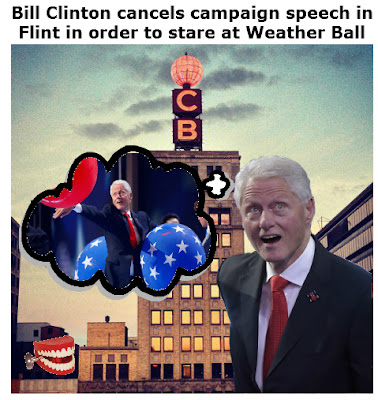 ...When the weather ball is red, another commie is ahead.

You may recall Bill Clinton's reaction to the balloon drop at the DNC convention in January. He stood mesmerized and with mouth agape, as the netting bra released the colorful round mounds from the ceiling. He playfully batted and kicked them to and fro as they floated within range. You could see in his eyes that nothing else existed in the entire world to Bill in those moments, and we couldn't help but wonder if this was what Lewinsky saw when releasing her balloons.

Bill Clinton was in Flint yesterday to campaign for his wife, Hilery (sic). This was yet another reason for me not to break my almost 7 year absense from the city where I grew up and worked (besides the current prohibitive distance of about 7 miles).

I haven't been in downtown Flint in so long that I don't know if the old Citizen's Bank Weather Ball is actually still there. Since the 50's, the Weather Ball has been a sort of Flint icon (like street violence and lead water) and has dominated the city's skyline. There is a well-known jingle we grew up with around these parts that goes like this:

If it is still there (and it was lit up) I imagine it at least distracting Bill Clinton for a few hours.

Maybe that potential problem was foreseen in advance and a large tarp was thrown over the Weather Ball to keep it out of sight from Billy's wandering eyes. After all, Georgetown University was forced to use tarps to cover the crucifixes and all other references to Jesus Christ in advance of Barack Obama's visit back in 2009.
Posted by DaBlade at 7:56 AM