October Surprise Predictions - You Won't Believe What's About To Happen!

It's October, meaning political pundits everywhere are girding their loins and waiting for the other shoe to drop. NOTE: Hilery (sic) left the first shoe on the curb by her limo.

Here are just a few of my October Surprise predictions:

Julian Assange of Wikileaks keeps his promise by releasing damaging information meant to sink Hilery's (sic) presidential aspirations once and for all. Her poll numbers and lead over Trump increase dramatically as a result. 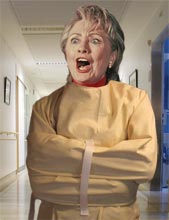 Conspiracy theorists have suggested that Hilery (sic) used "hand signals" to communicate with moderator Lester Holt during the first presidential debate, as if moderators have ever needed promptimg in rigging these debates. To dispel these charges from the "parent's basement dwellers", Hilery (sic) performed the next debates in a full straight jacket pantsuit. Her poll numbers and lead over Trump increase dramatically as a result.

FULL DISCLOSURE: I have used hand signals at my TV and directed at the moderators during these debates for many years.

Hilery (sic) puts out a list of possible Supreme Court nominees, and topping her list is Alicia Machado, the former Venezuelan Miss Universe who Hilery (sic) claimed was "fat-shamed" by Trump in 1996. Machado would join Sonia Sotomayor as the only other woman on the court of Latin descent. The pair become known as the "Wise Latina" and the "Size XXXL Latina."


Is Trump trying to lose?  The theory that Donald Trump got into the presidential race in order to hand the White House to Hilery (sic) and to destroy the Republican Party "got real" when Trump showed up to the second presidential debate wearing an army helmet, ala Michael Dukakis. Trump spent two thirds of the debate simply over-enunciating the word "Chi-naaah". Her poll numbers and lead over Trump increase dramatically as a result.

IN OTHER FUTURE NEWS:

San Francisco 49ers quarterback Colin Kaepernick suffers third degree burns after his afro catches fire when he attempts to burn the American flag during all his free time on the sidelines and bench.

The United States reneged on earlier agreement to hand over the oversight of the internet to a global entity when it learned it's self-professed inventor, Algore, was not part of the agreement and we were expected to keep him.

Those are my predictions so far. Yours?
Posted by DaBlade at 9:01 AM