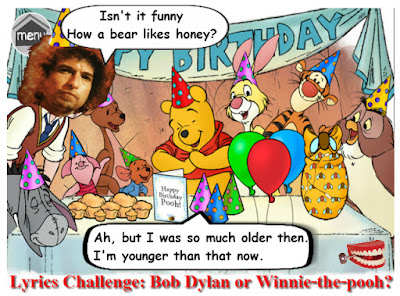 Yes, this is what this political season has me resorting to.

The big news of the past week...
Some have called him a poet laureate who "dramatically redefined the boundaries of literature, setting off a debate about whether song lyrics have the same artistic value as poetry or novels."

But enough about the song stylings of Winnie-the-Pooh, who turned 90 years old yesterday. A A Milne's Winnie-the-Pooh was published October 14, 1926, and was Winnie-the-pooh so much as awarded a huney pot by the mainstream media? (SPOILER ALERT: NO!)

Apparently, some old folk singer named Bob Dylan won the Nobel Prize for his lyric scribblings. The dude may have some talent for writing, but he sure can't carry a tune like Christopher Robin's stuffed teddy. Talk about getting the short end of the wooden honey dipper!

I would even argue that Pooh's song lyrics were superior to Dylan's. Need proof?

DYLAN: The wind howls like a hammer.("Love Minus Zero / No Limit")
POOH: Oh, the wind is lashing lustily; And the trees are thrashing thrustily; And the leaves are rustling gustily ("A RATHER BLUSTERY DAY")
Winner: Pooh

DYLAN: Once upon a time, you looked so fine; Threw the bums a dime in your prime … didn’t youuuuuuuuuu?; You never understood that it ain’t no good, You shouldn’t let other people get your kicks for youuuuuuuu
POOH: The wonderful thing about Tiggers; Is Tiggers are wonderful things; Their tops are made out of rubber; Their bottoms are made out of springs; They're bouncy, trouncy, flouncy, pouncy;Fun, fun, fun, fun fun!; But the most wonderful thing about tiggers is;I'm the only one
Winner: Pooh

OK, I gotta give that one to Bobby. So that got me to thinking... what if these two had collaborated? Like peanut butter and chocolate. Can we take two great songs and make them better? I think so.

I call this,
"All Along the Pooh Tower" 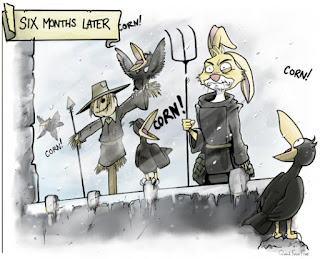 pics from A Smackerel for Crows


"There must be some way out of here" said the joker to the thief
Deep in the Hundred Acre Wood,
Where Christopher Robin plays.
"There's too much confusion", I can't get no relief

Businessmen, they drink my wine, plowmen dig my earth
A donkey named Eeyore is his friend.
And Kanga and Little Roo
None of them along the line know what any of it is worth.

"No reason to get excited", the thief he kindly spoke
There's Rabbit and Piglet. And there's Owl.
"There are many here among us who feel that life is but a joke
But most of all Winnie the Pooh!

Winnie the Pooh, Winnie the Pooh,
But you and I, we've been through that, and this is not our fate
A tubby, little cubby, all stuffed with fluff.
So let us not talk falsely now, the hour is getting late".

He's Winnie the Pooh, Winnie the Pooh.
Outside in the distance a wildcat did growl
There's Rabbit and Piglet. And there's Owl.
Two riders were approaching, the wind began to howl.
A willy, nilly silly old bear. 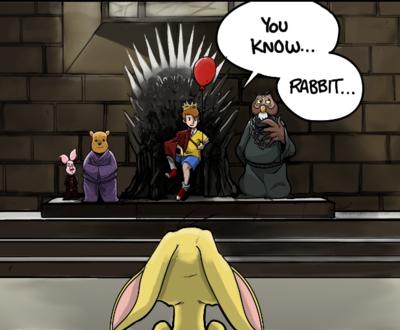