UN lineup: First came Lib leader BO, president of the world, followed by Libyan leader Moe Khadaffy. Mahmood Ahkmadeenadude followed much later due to Khadaffy's speech going into triple triple overtime. My scorecard showed that Obama was only slightly more anti-semitic in his remarks than Ahkmadeenadude, who by comparison was clear and concise in his desire to see Israel wiped off the map. 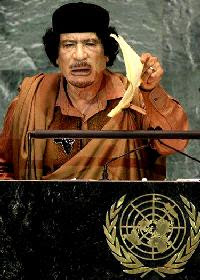 Khadaffy looked splendid in his rust-colored toga with an Africa-shaped broach pin, and accenting his ensemble with a black beret over his wild doo that resembled large rodents trying desperately to escape. He would look equally at home at the UN podium or twirling his favorite female bodyguard on Dancing With The Stars. During his remarks, he reopened the JFK and Martin Luther King assassinations, absolved the Taliban from responsibility for 9/11, and claimed paternity of Rielle Hunte's love child. I believe this is what caused the Canadian diplomats to walk out.

Khadaffy finally left the stage after he ran out of post-it notes from inside his robe and had ingested all of the crumpled pages from his yellowed legal pad.

Next up was the Iranian president. Ahkmadeenadude wasted no time launching a verbal assault against Israel. He was about 15 minutes into his remarks when Khadaffy appeared from offstage and pushed Mahmood aside, apologizing, but stating that he would be remise if he forgot to state that Beyonce had the greatest video of all time.

Then again, I may have mixed a few things up cuz my pitched tent collapsed on me at this point.
Posted by DaBlade at 7:32 AM