James L. Pouillon (The Sign Guy) protested daily against the horrors of abortion for more than two decades, and for that he had to die. 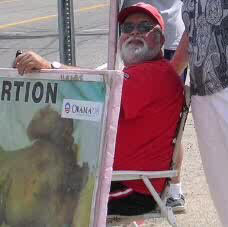 At least that is what went through the mind of his killer yesterday morning, as he went out in search of settling some scores on a list of three. He started his morning by spraying multiple gunshots from his car and killing Mr. Pouillon as he demonstrated in front of Owosso High School, "because he didn't think kids should have to look at dead babies on their way to school".

There is some typical liberal logic for you.

OBAMA: "I don't know, not having been there and not seeing all the facts, but I think it's fair to say, No. 1, any of us would be pretty angry at the sign guy. No. 2, the sign guy acted stupidly by misrepresenting a woman's right to chose. No. 3, If you get hit (Tiller), we will punch back twice as hard."

OK, so those are pieces of Obama quotes from other equally stupid statements not having anything to do with this story, but you just know this is how he feels about it. If CNN can make shit up, why can't I?

Remember when Scott Roeder shot and killed mass-murdering baby killer (and family practitioner), doctor George Tiller? The left almost unanimously blamed all pro-lifers as somehow contributing to this shooting by not preaching the left's mantra that human babies are nothing more than chattel.

While I certainly have not lost any sleep over the death of late-term baby slaughterer Tiller, I have consistently made the point that it is Roe v Wade that needs to figuratively take multiple bullets and left to die at the side of the road with other previous unjust and immoral "laws".

Sorry for the above graphic metaphor. That is like showing a bloody picture of an aborted baby to a "pro-choicer". They shouldn't be subjected to the results of their belief, right?

Killing the killer, Tiller, (say that three times fast) didn't stop the abomination of abortion. As long as this immoral law remains on the books, you can rest assured that another Godless liberal sociopath will take up Tiller's banner, for attention and/or profit, and continue to vigorously disembowel human children.

May it also be true that James Pouillon's sign and cause be taken up by those of us he has inspired. This cause will live on until the pro-life movement successfully overwhelms the pro-death liberal democrat crowd and results in the overturning of Roe V Wade.

Rest in peace Mr. Pouillon. God Bless you and keep you sir. You've earned your heavenly rest. Let us pick up your sign and take it from here.
Posted by DaBlade at 7:51 AM