One of my favorite scenes in the movie The Jerk - 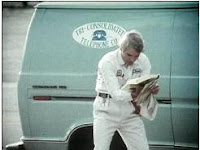 30% of the nation's voters Strongly Approve of the way that Barack Obama is performing his role as President. (75% of these folks should have their fork fitted with a cork on the end for their own protection, while the other 25% should not continue to be fed)
41% Strongly Disapprove
29% apparently would not be able to perform the following complex mathematical gymnastics (30 - 41 = -11)
Presidential Approval Index rating: -11

Dick Cheney called it like it was by stating Obama's witch hunt CIA probe was an "outrageous political act that will do great damage, long-term..."

Oh yah!?
Obama is having greater success taking out terrorists than that Bush guy, at least according to Obama's National Security Adviser and Kool Aid stand entreprenuer, Jim Jones. Of course, in the Department of ObamaLand Security, terrorism is defined as rightwing extremism, so I guess Jonesy's assertions depend on your definition of what "is" is, eh? Certainly those citizens participating in the angry town halls last month, or the ongoing Tea Party movement, should all be rounded up and detained for wanting a president who looks like Diane Watson to fail.

JONES: "I haven’t seen any compelling evidence that would argue because somebody was subjected to enhanced techniques that there was a revelation that we wouldn’t have had,” he said, “but it is very hard to prove the negative on this.”

Hey Jonesy, I don't need to see the air I breathe in order to realize it's importance to my health and well being. How about 7 years of the Bush administration keeping us safe after 9/11. As for whether or not waterboarding worked (and I believe there to be plenty of proof that it did), you say "it is very hard to prove the negative". Huh!? How about erring on the side of caution sir. Apparently you have been taking lessons from Obama and this question is "above your pay grade". But I guess that if we don't err on the side of life in the case of legalized infanticide in this once just country, why should we value it's citizenry over terrorists.

By the way, I believe it would be inhumane to force a prisoner to play "24:The Game" on the PS2. I make that statement not ever having played the game, but on the strength of the following video clip I stumbled across. The scene setup is - "Jack Bauer (the player) interrogates a terrorist suspect".

Apparently, you the player have control over Jack's technique when questioning his prisoner by using "Aggressive, Coax or Calm". Somehow I don't believe the real Jack would have had the patience demonstrated by his electronic alter ego toward this pixelized punk. I, however, demonstrated uncanny patience by making it through the entire clip without nodding off. SPOILER WARNING - Of course, the prisoner spills his guts with nary a finger laid on him. As if...