Obama to Call For a Beer Summit II to Save Van Jones?

I have had enough of Glenn Beck and Fox News ripping into Obama's special adviser and Green Czar, Van Jones, trying to make him a "mounting liability" for Obama. How is this self-described communist and anarchist supposed to do his part in destroying the US economy when all of these distractions of his past youthful indiscretions keep popping up. He participates in one little Rodney King riot and now he's labeled? This is still AmeriKa, is it not?

Sure, the guy founded STORM, a group focused on the study of Marxists and Lenin. Van Jones himself adored Chairmen Mao of Communist China, a monster responsible for a paltry 77 million innocent deaths of his own people. You can't blame Van Jones for this, as he formed STORM years ago when he was busting skulls as a Black Panther and doing a lot of blow and smoking a lot of weed.

"Mr. Jones has attacked those that put themselves most at risk and defended a man that was a killer. Mr. Jones was the creator of Copwatch; an organization that sought to antoginize Police Agencies through Racial Grievances and to undermine the Justice System. In the end Mr. Jones went on a crusade to free the murderer of Danny Faulkner; a man who was a father, a son, a husband, and a Police Officer."

Now his name is found on a 2004 9/11 "Truther" list. What's the big deal? This just means Van Jones believes George W. Bush conspired to allow 9/11 to happen as a pretext for war. I have consulted with the experts like Whoopie Goldberg and Rosie O’Donnell on this issue, and let's just say "there are questions". Not that there is any validity to the 9/11 truthers claims. Those are preposterous. Rather, the point is - these people hate George W. Bush, and really, isn't that all that matters?

VAN JONES: "I did not carefully review the language in the petition..." I just thought it was a petition for support to impeach Bush. You can't expect me to read every little thing I sign, just because I'm in charge of $30 Billion of your money, do you?

DaBlade: So what is this "green" crap you go on about? Is it about being for the environment, and having clean water and clean air, unlike the "Republican a$$holes" who like everything all wee wee'd up?

VAN JONES: My goal is to make sure the greenest solutions go to the poorest people. I don't care 'bout "green this, and green that." That's just a vehicle to take the wealth and land it on the hood. Can y'all take it? I'm going to be real with y'all.

Obama calls for an emergency Beer Summit II in response to the Van Jones controversy:

You remember Obama's first "teaching moment" when he had Henry Gates (the Harvard professor) and James Crowley (the police sergeant who controversially arrested Mr. Gates) over for a "cold one" and a little bit of racial healing, right? It worked so well the first time, might as well do it again.

Pictured below (from left to right): Joe The Biden (apparently nodding off after a few sips from his O'Douls), The Notorious Van Jones, convicted cop killer Mumia Abu-Jamal on the TV screen (live from death row), a table tent picture of Officer Danny Faulkner (unable to attend because he was brutally murdered by Mumia in 1981), Crowley again (hey, there's beer!), and Barack Hussein Obama. 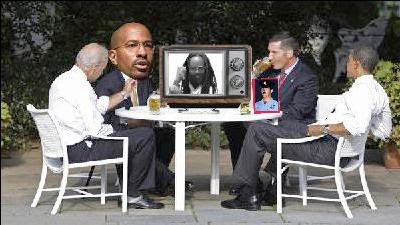 OBAMA: I don't know, not having been there and not seeing all the facts, what role race played, but it's clear that officer Danny Faulkner must have acted stupidly in that 1981 traffic stop of Mumia's brother. Now can we just allow Van Jones to get on with his job of being real with y'all by helping me destroy this country please!?
Posted by DaBlade at 6:54 AM