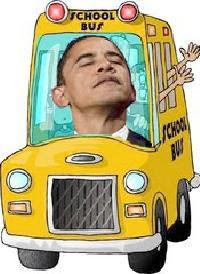 OBAMA: I’m here today because I have something important to discuss with you. I’m here because I want to talk with you about your education and what’s expected of all of you in this new school year. Every single one of you has something you’re good at. We just need to figure out how your talents can best serve me, your president and leader for the next 30 years or so. If I have my way, by the time all of you graduate, there will not be any corporate jobs or small businesses left to work for, so you will need to find your unique place in my civilian security work force.

Please spend the next five minutes with your forehead pressed against your prayer rugs and nap blankies in quiet contemplation of this.

OBAMA: You can be anything you want to be when you grow up, as long as it's on my approved list of occupations in the new progressive order. Maybe you don't play football, or are otherwise not physically cut out to weild a baton in front of a polling booth. Maybe your scrawney frame will not allow you to serve me by helping to root out and remove remaining pockets of dissension. Don't worry, I will find a place for you. How does working for ACORN as a community organizer grab ya?

Astronaut Schmatztronaut! How about working for a technology vendor in the White House New Media office, and help with the massive, secret effort to harvest personal information on millions of Americans from social networking websites.

Or you can become a slovenly pseudo-documentary film hack who gets rich by making anti-capitalism propaganda movies.

Or you can shine shoes... 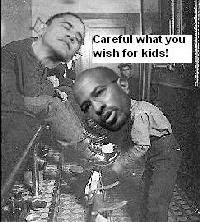 Pictured: Van Jones may have gotten the White House boot from his old job as the so-called Green Czar, but he quite literally is getting the boots in his new job as Obama's shoe shiner. “I love Obama . . . I’d pay money just to shine the brother’s shoes,” The Notorious Van Jones said between Obama buffs.

I have two kids in high school. Neither one is staying home today, and neither one will be subjected to Obama's little pep rally. They can go to the library or they can go to the gym. I don't care. It's not that I'm worried about what they would hear. I've read the text of Obama's planned remarks and it appears he has taken out his self-idolatry lesson plans and that what remains is entirely innocuous.

That said, this president just does not deserve the respect, and has not earned the right, to hold my children as a captive audience. I am well aware that previous presidents have given "similar speeches". The difference is, they were not blatant radicals intent on the dismantling of this country's founding principles.

In today's official Chattering Teeth Blog study guide: I am assigning you students to write letters to yourselves on how you “can help DaBlade” defeat Obama's socialist takeover attempt of the United States.
Posted by DaBlade at 6:57 AM