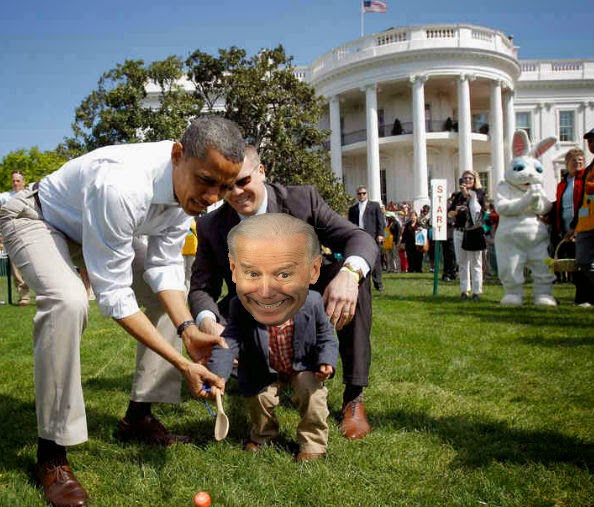 Joe 'Reek' Biden woke up at dawn on the morning of April 21st, 2014 and catapulted out of his Trundle race car bunk bed he shared with Press secretary Jay Carney. Today would be the 136th White House Egg Roll hosted on the South Lawn, but Joe just hoped it would be his first egg roll victory.

The bottoms of Little Joe's feetie pajamas barely touched the floor, as he zoomed toward his large-handled wooden spoon atop his dresser that he would be using in today's contest. Little Joe ran his finger along it's smooth edge, as he thought fondly of the hours Barack and he had spent over the past year whittling, shaping and sanding this spoon from a piece of virgin pine, like father and son creating a Pinewood Derby car. The difference being, Little Joe had the benefit and use of NASA supercomputers dedicated to making the perfectly balanced wood spoon, with various Small lead weights inserted at just the right places.

Little Joe winced as he remembered the long weeks it had taken to become desensitized to this wooden spoon, as it reminded him of the metal serving spoons and spatulas used by White House kitchen staff to beat him when he said something stupid. These metal utensils had since been retired, as they had become more bent and twisted than the dining set of a hotel after hosting the mentalist and magician convention.

Then Little Joe smiled as he remembered the hours of training endured rolling frozen egg rolls on the Oval Office carpet. The grueling training was over. It was now show time and Little Joe knew that he was ready.

I am really going to be bummed if there is not more raw footage of Obama "playing basketball" on the South Lawn court again. Remember last year when he bricked air ball after air ball from the free throw line? 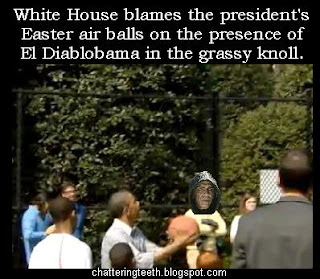 I'm not holding my breath. I'm sure his handlers have moved the barricades once used to block out the veterans from the WWII Memorial to now block Obama's access to the court and prevent more of this embarrassing footage from taking place.
Posted by DaBlade at 8:05 AM