First Lady Criticized Over Trip To The International Space Station

Fresh on the heels from her estimated $150 Million March Madness trip to China, First Lady Michelle Obama is now en route to The International Space Station (ISS) and once again is accompanied by her mother and daughters. Right wing critics are once again bellyaching at the price tag, this time estimated to be $1.5 Billion. 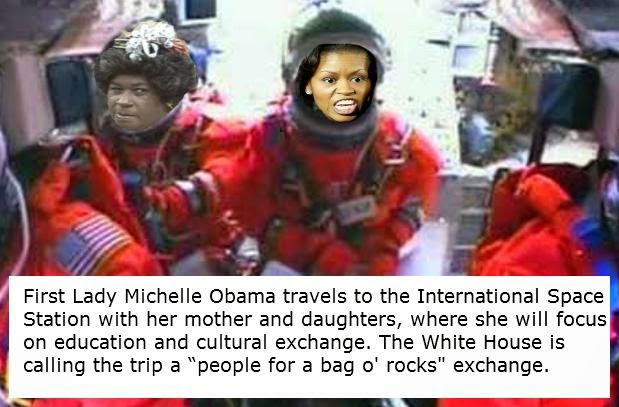 Once again, the First Lady is traveling conspicuously without her husband, pouring rocket fuel on the rumor flames that their marriage is on the rocks. Sources say the couple had another blowout, during which Mr. Obama was overheard pleading with his wife not to go to the ISS.

Excerpts of fight:
OBAMA: Woman, Where's yo dollah? Don'tchu even think about another vacation woman! Makes no sense! Makes me look bad!
MICHELLE: Don't YOU tell me what to do! I need another vacation from YOU! I need SPACE!
OBAMA: (*pause* *hand on chin in thought* *IDEA!*) Let me be clear. I forbid you to go to space.

A reporter for Chattering Teeth News caught up to the president at the putting green at Augusta National Golf Club.

CT NEWS: "Mister president, there are some who say you used reverse psychology on your wife, and that you really wanted nothing more than having her, the two brats and the mother-in-law orbiting 240 miles above the surface of the Earth because you had already made this tee time.
OBAMA: *wink* Now what kind of husband would I be if I denied my wife another spectacular view of the Great Wall of China.

The First Lady's itinerary includes space walks, zero gravity "Let's Move" aerobics and classroom video lessons, and a possible moon landing to collect rocks and maybe make a deposit or two, depending on the girls behavior.

The space station has more than 15,000 cubic feet of habitable volume, 14,500 of which has been cordoned off by a very demanding mother-in-law, who has already been insulting the international astronauts and scientist with orders to retrieve her floating shawl.
Posted by DaBlade at 8:45 AM