While it's true that  the Feds left a trail of wreckage after the Bundy ranch siege, we are only now just discovering the psychological impact on the freed cattle.

The cows have been exhibiting communist and socialist tendencies since the release. I have coined this form of mad cow disease as "Livestock-holm Syndrome", a form of the more widely known Stockholm Syndrome, where the captive hostages express empathy and sympathy and have positive feelings toward their captors, sometimes to the point of defending and identifying with them. (per wiki)

As regular readers of this blog know, I have dedicated my life and lengthy career, if not the last 5 minutes in this nonsensical blog post, in the study of cow psychology. It is with those impressive credentials that I sat down to interview the self-named Cow Tse-dung, newly appointed leader of the herd (who asked to be shown only in silhouette to protect himself from the "Free-rangers"). 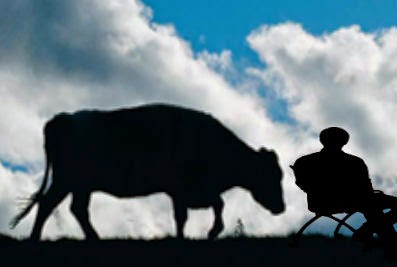 CT NEWS: Mr. Dung, thank you for doing this.
COW TSE-DUNG: My pleasure. Before we get started, can I have the first cow, Mooshell, get you a cup of tea?
CT NEWS: No thank you. Good to know some things never change. First question, why is the entire herd just laying around smoking the tumbleweeds instead of grazing?
COW TSE-DUNG: In my cowmune, its each according to his ability, to each according to his need for feed. We just send a few agents out to tip over the few cows still trying to graze for themselves, and add their cuds to the collective. It's all gooooood.