PLOT DEVICE: Will a hungry tiger bite off more than he can chew by eating the largest known irrational number? 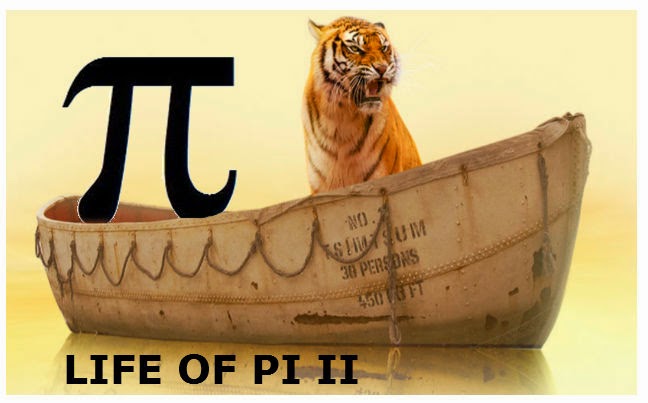 Welcome to Pi Day, a day set aside by math nerds who love a number a smidgen over '3' with an infinitely huge tail (no, not Kim Kardashian's IQ).

Pi Day, or as the illegal aliens call it, "Catorce de Marzo", is calculated by dividing the circumference of a circle by its diameter, leaving the resulting ratio as 3.14 blah blah blah. It has been 'computed' to over 2.7 TRILLION digits and the Supercomputers are still crunching. I, for one, am infinitely thankful these Supercomputers are doing the work most Americans (or illegal immigrants for that matter) won't do.

ARE YOU LISTENING? I said, "52!". This may not happen again for another hundred years. And I don't have to tell you the significance of this. There are 52 weeks in a year, 52 cards in a deck of playing cards, AND "52" is the code for international direct dial phone calls to Mexico! Kinda blows your cabeza, dont'it?

HELPFUL "TIP": Next time you're using Pi to solve complex algorithms and random vectors in order to calculate the proper amount to leave for a 15% tip, it is standard acceptable etiquette to round your infinite number to just two decimal places.

MOTIVATIONAL TAKE-AWAY: Next time life hands you a lemon and you feel like throwing in the towel and just giving up, just remember Pi hanging in there and continuing to grind the sausage with another number. If "Pi", a lonely consonant followed closely by a single vowel can do it, SO CAN YOU! Just remember, there is no "I" in "Pi"... errr... OK, maybe there is, but there is no "quit" in "Pi".

Please join me in this non-synchronized moment of silence in deference and honor to that number that just refuses to give up. [Pause] Gracias!
Posted by DaBlade at 9:38 AM