Hidden Imams World Tour - What are the Critics Are Saying?

There have been plenty of warmup acts, but now comes the headliner of the WWIII Middle East Meltdown "Death to America" Tour! 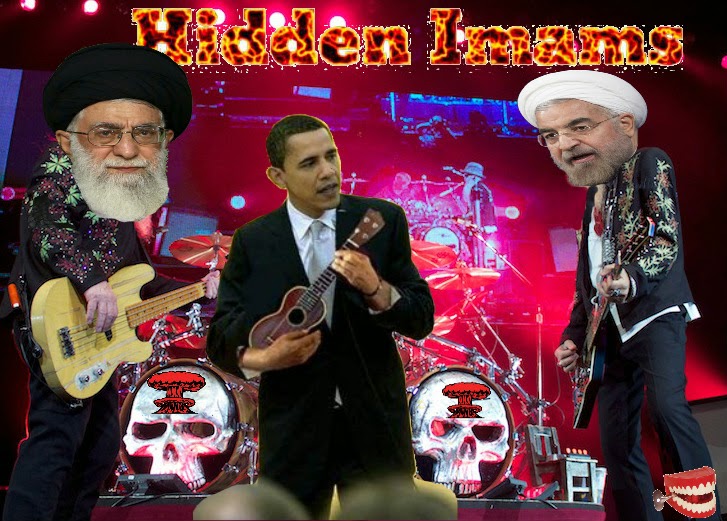 Obama has officially joined this Radioactive Metal band from Iran, after years of filling in as a frequent guest singer for the group.

HISTORY OF THE BAND
"When we were founded back in 1979, we literally had to hold audiences hostage," said supreme jammer, Khamenei. "The band practiced for years in a fortified underground bunker, and we went by the name "The Spinning Centrifuges" in their early days."

They lost an original band member and good friend of the revolution in previous drummer Mockmood Ahkmadeenadude. It is believed that Mockmood is in treatment for alcohol abuse, and was known in the tabloids for chasing every full veiled burqa in the mosh pit and for riding goats into hotel pools.

With Mockmood on leave, promoters want to know who has replaced him on the drums.

"Don't worry about what we have in mind for percussion. You will learn this very soon," promised Khamenei.


HERE'S WHAT THE CRITICS ARE SAYING!

I loved it! Obama's shredding ukulele solo of "Tiptoe through the Mushroom Cloud" was haunting! - The New York Times

Obama once stated, "the Muslim call to prayer is one of the prettiest sounds on Earth at sunset." I guess there's no accounting for taste. To me, they both sound like Shiite. - Chattering Teeth News
Posted by DaBlade at 7:57 AM