...we will still be here on October 1st.

I know that's going against the new conventional thinking and I am going out on a limb here. How embarrassing will I be if the September-whatever blood moon crashes into Earth and takes down our power grid!? Or man-made global climate change causes temperatures to fluctuate and become unpredictable in the next week or two? Call me an optimist, but I believe our survival will extend several weeks more than what some of these fringe predictors of September doom proclaim.

It's not like I don't see the writing on the wall, people. It's hard to miss, as I do enjoy coloring on the cafeteria walls with crayon. 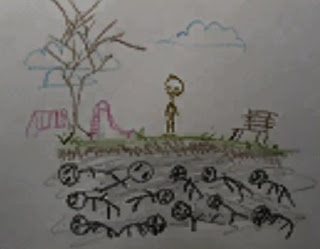 And while I do hate to be judged mental, I just think those people who pick September 28th as the apocalypse are CRAZY.


Benjamin Franklin "coined" the phrase, "time is money". If that is the case, there is no doubt we are living on borrowed time and borrowed shillings. The economy is as wild and unruly as Bernie Sander's hair, and it will collapse. It's unavoidable. This debt level is unsustainable. No amount of hair gel can hold it up. Nor toothpaste, for that matter (which is what my friends and I use on our scalps).

This massive borrowing and spending against the future is like when you give up gnawing at your indestructible wrist restraints and just chew right through the forearm. Oh sure, you might get a few minutes of rambunctious freedom playing and running through the front yard hedges, but at some point the men in white coats will catch you, or you'll pass out from blood loss. But I digest.

As for other potential dangers on the horizon? It is a mathematical certainty that in the future there will be devastating earthquakes, volcanoes and floods, with the occasional asteroid for good measure. I mean, it's even possible that Joy Behar may not always be on The View (*HORRORS!!!*) Sorry for that last one, but I do think we need to be prepared.

It's not that I have anything against preppers, per se. I actually AM a procrastiprepper myself (I'll get around to it). I'm just not nutty enough to give myself this false September deadline. How batcrap whacko does one need to be for that?

So I'm thinking maybe October 3rd of next year might be a date to be concerned about. In the meantime, Live it up! I hope you dance! Just not in front of the TV set. The View is starting in the community room.