Today on Meet the Press... 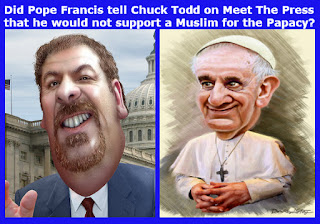 POPE: Well, I guess it depends on what that faith is. If it's inconsistent with the values and principles of The Church, then of course it should matter.

TODD: So do you believe that Islam is consistent with the Catechism of the Catholic Church?

POPE: No, I don't, I do not. I would not advocate that we put a Muslim in charge of The Church. I absolutely would not agree with that.

But I do think that Ben Carson would make a terrific El Papa!

PROGRESSIVE PUNDITS: Nowhere in that back and forth does Pope Francis stipulate that he is talking about a certain radicalized strain within Islam. Religious bigot!We heard you, sir!

We interrupt this satirical blog post to bring you this very important message from the CEO, CFO and all-around BMOC of the Chattering Teeth Blog, Jerry 'DaBlade':
Ladies and gentlemen... and confused transgendereds. You may be thinking the above fake interview seems a little familiar. That's because it is the exact interview between Chuck Todd of Meet the Press and Presidential hopeful, Ben Carson, with just a few key words changed.

Mr. Carson answered in a similar way that he would not 'advocate' a muslim president, and a liberal firestorm ensued. "THAT'S AGAINST SOME CONSTITUTION ARTICLE THINGY THAT FORBIDS ONE HOLD THAT OPINION!!!," some progressive twits wrongly stated.

It's true that Article VI, paragraph 3 of the United States constitution states “no religious test shall ever be required as a qualification to any office or public trust under the United States.” This has nothing to do with Mr. Carson stating his opinion. It's one I share, and apparently so do many others based on the recent boost to his coffers.

What does that have to do with your ridiculous analogy using the Pope above?

Thank you for that nonsensical interjection, mister disembodied progressive voice and disenfranchised mind. Hypothetically, Pope Francis may or may not hold the opinion that a muslim should not be Pope. Technically, a non-Catholic male could be elected Pope, but he would have to be immediately converted to Catholicism, ordained as a priest, and consecrated as a bishop before becoming Pope.

This seems about as unlikely as an America-hating, anti-Semitic, muslim sympathizer of questionable national origin being elected president of the United States and suddenly converting to a believer and upholder of our Constitution and our rule of law. 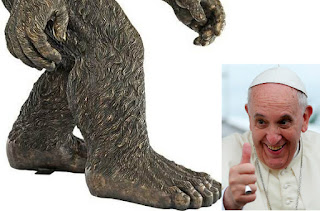