Obama stares down Glacier - "Oh no you di'int!"

Headline of the day -

Awesome! "The High One" stared the Exit Glacier into submission! Such is the magnificent power of The High One's glorious gaze! (Of course, Chattering Teeth News has learned of a potential secret side deal with the Glacier, allowing it to continue to recede due to the laws of nature).

Using my master of disguise (A Polar Bear clinging to an iceberg) I was able to score this exclusive. I asked obama what he was pondering, as he stood at the front of the boat and aimed his glorious gaze off the starboard bow. 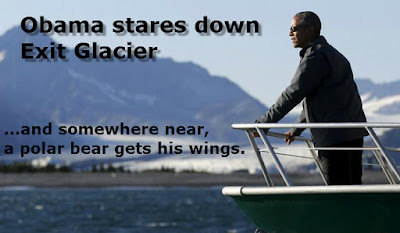 OBAMA: "I was just thinking that when I booked this on my schedule, I thought they said a vist with Kanya West. But Kenai Fjords national park is cool too. So when does Ice Cube show up?"


There are 616 officially named glaciers in Alaska. As of today, Obama has 505 days left in office. I am willing to give The High One the benefit of the doubt regarding the power of his stare to stop glaciers in their tracks - but only if he promises to continue his climate study by visiting a glacier per day for the remainder of his reign.

PICTURED: As you can see, this force of nature is clearly GROWING and EXPANDING, not receding. 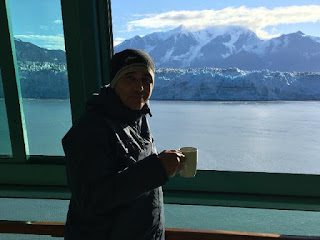 But enough about DaBlade's increasing waistline from the cruise ship feed bag buffets last month. In the background is Hubbard Glacier. This glacier is also GROWING and EXPANDING, and I'm left to conclude it is because of the power of my gaze. The fact that it was growing for hundreds of years prior to the willful stare over my coffee cup shouldn't matter, since Obama doesn't mention the fact that the Exit Glacier has been receding for hundreds of years before his bicycle helmetless boat ride.
Posted by DaBlade at 8:04 AM