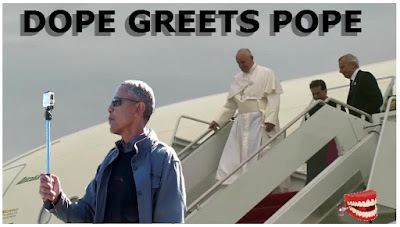 Despite Obama's promise to the Vatican that he would not make a circus of the Pope's visit by having a greeting committee of America-hating anti-Catholics, Obama showed up with his family anyways.

4:15 p.m. - The Pope offers his ring to Obama to kiss. The Pope's ring is also called the Piscatory Ring or Annulus Piscatoris. The ring is part of the Pope's regalia.The Pope’s ring is also commonly referred to as the Ring of the Fisherman. The Pope is the leader of the Catholic Church and the successor of Saint Peter who used to be a fisherman before he became Christ's disciple.

Instead, Obama offers the Pope his own ring he had made from his college Allah Muslim Arabic Ring. "I got your fisherman right here," Obama was overheard saying. 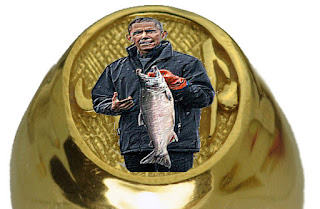 5 p.m. - In a symbolic display, Pope Francis washes the feet of the First Family. Things become tricky when he gets to Mooshell. In order to avoid a diplomatic incident, he insists on completing the job.