Silly season has reached the summit of Mount Frivolity. A veritable culmination and crescendo of simple mindedness, and indubitable pinnacle of vacuousness - and other words found in my online thethorus (I can never type that word without a spelling lisp)

Seriously? Is this how low we have fallen that we are supposed to get excited by, and jump to every stupid main stream media twitter feed with the only purpose being to try to knock out the only constitutional conservative in this race? Well I'm not playing. I'm sticking to the issues here.


BREAKING NEWS!!!
Chattering Teeth News is reporting that Marco Rubio's son, Dominick, is taking time off from the campaign trail after yawning repeatedly during his father's speech in New Hampshire. Dominick will be making a big announcement at school next week during show-and-tell. 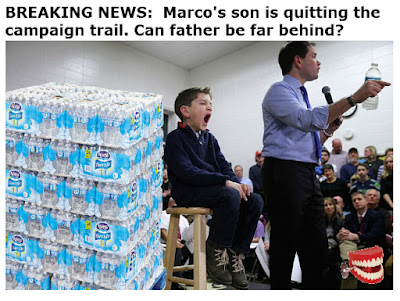 WOW! The water bottle doesn't fall far from the large skid. I wonder if this kid sweats as much as his dad? They say a symptom of dehydration is extreme fatigue. If I had to listen to the exact same speech verbatim, with the exact same jokes, quips and one-liners I'd likely nod off too.

In conclusion, I have nothing against Marco (except for that whole amnesty and gang of 8 thing, and the fact that he is an establishment darling). I don't think he is presidential material. I think Putin would just give the guy a hair tousle and pat on the head before stealing his Cuban Heels.
Posted by DaBlade at 9:17 AM