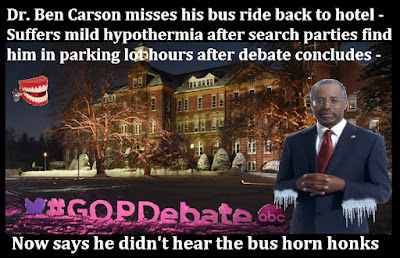 It all started when neurosurgeon Ben Carson missed his cue to walk out onto the debate stage at St. Anselm's College in New Hampshire. From there, it just got worse and worse.

Chattering Teeth News - Dr. Ben Carson missed his bus ride back to hotel after the GOP debate and suffers mild hypothermia while waiting in the parking lot hours after debate concluded. It took a few hours before family members realized the soft-spoken and reserved neurosurgeon was even missing.

He was found by the stage hand who was walking to his car after closing up the auditorium. This was the same stage hand who could be seen behind the curtain trying to wave Ben through to his podium.

"It was dark and I just thought some fool kids had moved the stone statue of that old dude by the fountain," said the stage hand. "It wasn't until I got close enough to hear his teeth chattering and mumbling something about him not out here just to add beauty to the parking lot, or something..."

Dr Carson will be transported home for additional changes of warmer clothing.