Chattering Teeth News - Most of the Republican presidential candidates are in New Hampshire coming off the heels of the Iowa caucuses where Ted Cruz won by a large margin. It is not known if Dr. Ben Carson has finished doing his laundry and ironing in Florida and joined the rest in New Hampshire, or if Marco Rubio is done polishing his boots - but rest assured the twitter feed will keep the journalists up-to-date on this breaking news.

With the political focus moving from Iowa to New Hampshire, Donald Trump is once again pushing the agenda by announcing he is in favor of granite subsidies with his latest tweet:

@realDoanldTrump - People call me the granite candidate because - like me - granite is a hard stone, capable of withstanding enormous pressure. That's why we need to protect these rocks with government subsidies #NH Rocks!

Not coincidentally, New Hampshire's nickname is "The Granite State", referring to its extensive granite formations and quarries. In fact, much of New Hampshire's bedrock is granite. 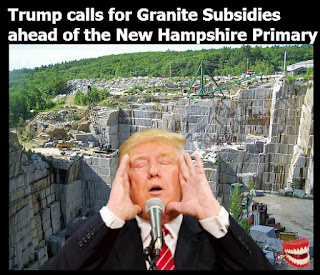 “You know what?," Trump said. “I went out to see some of the folks in those quarries, with the sawing and the chiseling. Good stuff and great people, put a lot of people to work out here. I just want to thank them, they’re doing an amazing job with the rock piles, this I will tell you.”

When reminded that Ted Cruz is against government picking the winners and losers in the form of subsidies, Trump responded by saying, "Frankly, I am not surprised. The big Oil companies give him a lot of money, so he's for oil. Tell that to the good people in New Hampshire living paycheck to paycheck."

Aside from the fact that Trump's ad hominem attack against Cruz is patently false, it's not clear what oil has to do with rocks. And with New Hampshire ranked 6th in the nation for median household income, its not known how many quarry workers are living paycheck to paycheck.

Donald Trump held a townhall at Rattlesnake Hill, the largest quarry in New Hampshire, located just outside the state capital in Concord. "I haven't seen this many stoners and slabs of dense granite since that Adele concert in New York last year, this I will tell you."

A hush fell over the crowd and not even a pebble scrape could be heard, as the clueless Trumpeters sported looks of confusion trying to determine if they had been insulted.

"Nowhere else on Earth can you find all these rocks," said Trump. When I'm president, not only will I build that border wall, I will build it using these big, beautiful 20-ton slabs from New Hampshire!"

And the crowd erupted in applause and tears.

Donald then pulled a small, smooth stone from his pocket and held it up for the crowd of supporters to see. "See this stone? My mother gave me this rock — this very rock from her rock garden in our backyard — many years ago. It’s just very special to me and again I want to thank the quarrymen. I will never let you down,” he vowed.