What did Pope Francis actually say about Trump and the border?

What did Pope Francis actually say?

TRUMP: Pope Francis is a very bad guy. He's a very nasty guy. Who does the Pope think he is saying I am not one of those Christians? After all, my mother gave me a Bible and its very dear to me. Isn't that what you Christians say?

BLADE: The Pope didn't say you weren't a Christian. First, he was responding to one of your unsolicited attacks and insults against him. And it was your rhetoric which he characterized as not Christian. He used the word 'only,' which in this case means 'exclusively'. Maybe if you'd explain your real position to the Pope in which you are in favor of "touch back" immigration, which is really just another form of amnesty...
http://hotair.com/archives/2016/01/22/cruz-trumps-for-amnesty-you-know/

TRUMP: I've never ever met a person that lies more than the Pope. One of the ways I can fight back is to bring a lawsuit against him... Even highly respected Senator, Tom Coburn, said Pope Francis was one of the most dishonest Popes he has ever seen. This, I can tell you.

TRUMP: Pope Francis has pathological disease with no cure. He has a wall around the Vatican. A wall, people! Yet he would deny us a wall?

We interrupt this fake interview with Donald Trump to bring you these words from the Chattering Teeth Blogmaster.

This is for all you Trump sycophants, apologists and  toady lickspittles who are quick to miss characterize this Pope and what he actually says, and who have posted pictures of the Vatican wall - as if this proves somehow that the Pope is a hypocrite.

I am no fan of open borders. I am an advocate for controlling the border, just as the Vatican controls their own. However, in any contest between Trump and the Pope, I'm siding with the Holy See. The underlying charge is self evident to anyone paying attention. Donald Trump is just as Christian as Obama.

Full disclosure - Those hateful words I put in Trump's circular piehole above are actual quotes he has used against Ted Cruz and Dr Ben Carson, both honorable men. But Trump's M.O. is to attack and to disparage in the press and on twitter, anyone who dares defy the great Donald.

So ask yourself just who it is criticizing the Vicar of Christ for celebrating Mass at the border because he thinks it 'political'?

TRUMP: I’m very capable of changing to anything I want to change to. 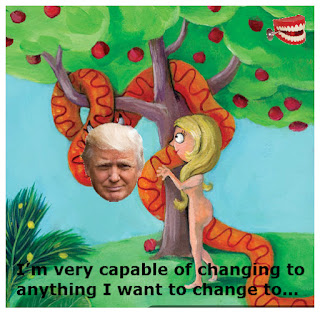 "It may come as a surprise to detractors of the Catholic position on immigration, but the Catholic Church acknowledges and supports the right of nations to control their borders and to enforce their laws. Indeed, enforcement is a key ingredient of a sound immigration policy, so long as it includes due process protections and safeguards human dignity."
Posted by DaBlade at 7:55 AM