As I was reading this linked article, I was well into the second sentence dealing with 'Egyptology' when I noticed my eyelids beginning to droop. "Have I been hit with a tranquilizer dart again?," I mused... as I started going numb. I feeel... sooo... sleeeepy... Zzzzz. 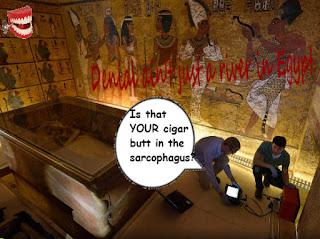 Chattering Teeth News - Today's deep undercover blog assignment takes me to Cairo, Egypt and the Second Annual Tutankhamun Grand Egyptian Museum Conference, where I will be testing my theory that the ancient pyramids were actually gender-neutral restrooms, and not grain silos - as argued by Dr. Ben Carson.

I was able to get a ticket to this conference on Stub Hub, though thankfully my negotiation skills enabled me to talk the Egyptian scalper down from his original asking price of "my first born son." I was just happy to have that old 'Bangles' vinyl album he wanted so badly, and I had already listened to the title track non-stop for the past 2 weeks as research for this undercover assignment.

Regular readers know I take pride as a master of disguise and an uncanny ability to transform myself into a different person (or pharaoh) for each blog assignment. Had I known I would gain ingress to King Tut's sanctuary with relative ease under cover of darkness, I would have spent less time on my disguise - a bath towel skort, a shirtless upper torso adorned with costume jewelry and my favorite sea shell necklace purchased from a Daytona Beach vendor in 1978, and a "ceremonial headress" I fashioned from a few socks and a feathered boa scarf from my college days.

As I approached the burial chamber, I tried desperately to remember how to "walk like an Egyptian" so as not to draw attention to myself. "Let's see... elbows at right angles with one arm up and one down... each hand forming a sort of sock puppet... head on a swivel..." I started to perspire nervously, as I tried to recall my intense Bangles training. Then I remembered to channel my "John Kasich" karate chops.

IT WORKED! I WAS IN!

I advanced through the darkened tomb Using the light from my lighter. Somewhere nearby was Mister T's final resting place - and this was an active archaeological dig site, so I walked gingerly and reverently in my disposable powdered blue hospital booties.

I wanted to be as respectful as I possibly could while conducting my advanced research, so I crushed out my smoldering cigar in the huge bathtub-sized ashtray with the funny man sculture inside that dominated the center of the room. "Now where could that boy king be buried," I wondered aloud.

It was then that the flickering light from my Bic danced across what appeared to be some paintings on the wall. I wondered if this was a new and exciting discovery I had made or if these "hieroglyphics" (for lack of a better word) had already been noticed by the researchers who had trod here before me. Probably not. Hacks.

It was then, when I noticed something vaguely familiar about a certain wall drawing of a man in a skirt. What WAS it? I just couldn't seem to put my finger on it... And then it struck me! EUREKA! My research will RE-WRITE the history books to a GREATER DEGREE than common core EVER COULD! 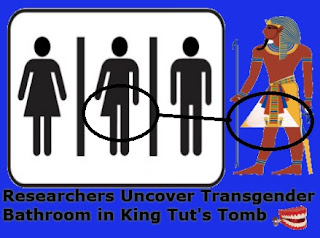 So in conclusion, the ancient Egyptians used transgendered bathrooms, perpetuating culture rot and helping to led to their ultimate destruction.

It was time for me to go, but like many here before me, I wanted to leave a little something of myself behind for 'posterior' sake.  With a can of blood red spray paint, I tagged over these childish drawings with this:

I felt comfortable in the knowledge that my addition to this graffiti wall added a little class to this otherwise humorless tomb.