Another article that seems to believe Gingrich would be a smart VP pick for Trump. 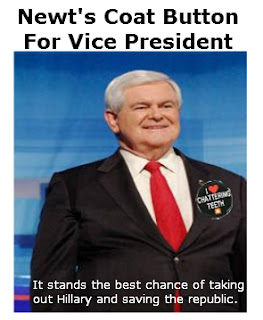 Picking Newt would do more than just "take Georgia completely off the table." His coat button could potentially take out the entire east coast.

I said it in 2011 that Newt Gingrich's coat button stood the best chance of taking out Barack Obama in 2012 but nobody listened. The coat button has done nothing but increase in torque and tension ever since - and when it finally blows, somebody is gonna lose more than an eye.

I have run the numbers (on my vintage 1970's Playskool abacus), and have estimated the amount of stored kinetic energy coiled in Newt's coat button has the equivalent punch as that of a tactical battlefield SAM (suitcoat-to-air missile).

Callista Gingrich has lived with the clear and present danger of a coat button eruption from Mount NewtSuitvius for 16 years. Popocatépetl may be an active volcano in Mexico, but it's pyroclastic punch pales to the potential of Newt's Pop-a-coat-petl thingy. Suffice to say, just put the kids in the hallway with a book over their heads if Callista calls for Taco Tuesday.

It has been assumed that Newt has been auditioning to be Trump's VP for some time, as I pointed out a few months ago in my spectacularly hilarious piece "Texts From Newt".

If Trump does tap Newt, he would do well to keep him away from the well-armored Hillary. An inopportune coat button launch could deflect off her cankle and result in a horrific friendly fire incident.

Newt would certainly help to coalesce the republican establishment to the Trump ticket. As for true conservatives? I do appreciate the roll Newt's coat button played in shutting down the government and in a roll reversal, taking Billy Clinton to his knees. But how can we be sure Newt's coat button is aiming in the right direction any more?
Posted by DaBlade at 7:38 AM