What was Trump doing on the grassy knoll?

The speculation during the highly contentious Republican primaries has been that the Democrat Party, hand-in-hand with the mainstream media, was simply waiting for Donald Trump to secure the nomination before unloading with both barrels from their voluminous stockpile of anti-Trump material. But who knew they were sitting on THIS bombshell?

And so it begins, starting with a taste of his own medicine. 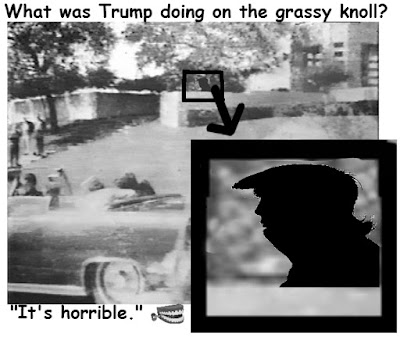 Chattering Teeth News - Just what was 17-year-old Donald Trump doing on this grassy knoll on June 14, 1963? Right prior to JFK being shot and nobody even brings it up. I mean, they don't even talk about that. That was reported and nobody talks about it. I mean what was he doing shortly before the death, I mean, before the shooting? It's horrible. The American people deserve to know.

"Frankly, when I said back in January that I could 'shoot somebody and I wouldn't lose voters', I meant it, believe me," Trump told Fox and Friends.

"Maybe Hillary should shut her yapper or her cankles will be dodging more than imaginary Bosnian sniper-fire, this I will tell you."
Posted by DaBlade at 9:28 AM