We've all heard the rhetardical question:
Does a transgendered bear take a dump in the woods behind Target?
Emphatically, I say 'yes'. If he wants to, that is. 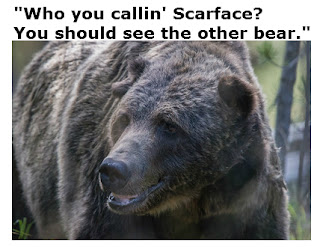 There is an estimated 750 grizzly bears in and around Yellowstone National Park. For the past week, however, there has sadly been one less grizzly roaming far and wide and often within sight of delighted tourists and their cameras. They say he was the most famous of all the grizzlies here, though I don't believe he ever played a guitar or took illegal drugs.

His birth name was bear No. 211, but to most others he was known as 'Scarface', Yellowstone's 'Grand Old Man'. To many, many other unsuspecting tourists he sneaked up on, he was widely known as 'OH SH*T"!
Death at Yellowstone: Feds probe shooting of ‘Scarface,’ the park’s most famed grizzly

I took the family on a Yellowstone vacation in 2005. We had one of those surprise grizzly encounters in the woods near Yellowstone falls.  I don't know if it was Scarface (he would have been a rambunctious 14-year-old teenager at the time) and maybe the odds say it probably wasn't. But since he kept walking casually by without ripping out our throats, I will always believe it was him.

R.I.P. Scarface. You were truly a majestic and inspiring creature.
Posted by DaBlade at 7:32 AM